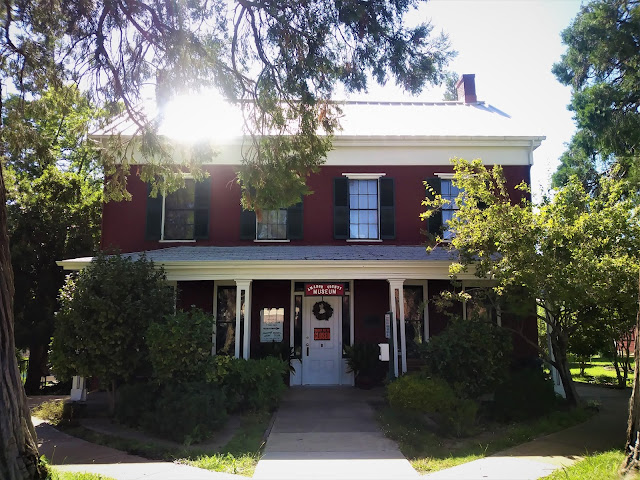 Perched on top of the hillside of Jackson on Church Street rests the home of Armstead C. Brown. Constructed for one of Amador County's oldest and important early pioneers, the home itself was built in 1859. It survived the great fire of 1862, which burned many of the buildings in Jackson, including the National Hotel and the old Hangman's tree on Main Street, but A.C. Brown's home, being situated on top of the great hill near the cemetery was saved. It has stood there now for over 160 years, and it is still just as beautiful as ever. I just didn't realize until recently, that property has a history that is older than the home that sits on it.

I have been visiting this home off and on for many years, ever since I was a child, since it has been the Amador County Museum for many, many years.  I had always been drawn to it, but I didn't realize until years later, as an adult, that there was a lonesome grave on the north side of the property. When I inquired about it inside the museum, the docent explained that the wife of a friend of A.C. Brown was staying there, and the young woman had died in childbirth, so the family buried her in their yard.

I visited the grave with sad thoughts in my mind, imagining how her last moments must have been, in agony giving birth and then passing on along with her child at such a young age. Given the fact I hadn't been told a lot about the circumstances of this young woman's death, I simply assumed she had died in the house, since the story told to me was vague.

Well, I was just up there this weekend again, and while Roland was visiting Hein's estate sale down the hill, I ventured up to the museum all by my lonesome to visit Eliza. While I was there, I took in the beautiful atmosphere all around me:  the breeze, the cool shade of the trees and the fragrance of the plants in the air. I felt safe, secure and at peace.

As I was walking back towards my car, I thought to myself, "this is such a beautiful spot, like going back to a simpler place in time." Within moments Roland surprised me walking up the cement staircase to the property and we sat there at a picnic table under the shade of the tall trees. I told him that this property is "one of my favorite places in Jackson."  I also mentioned that if it were just a regular home, and if I was rich, I would want to buy it and live in it because I love the feeling I get on the property itself! (It's funny that I said that and I will get to that reason in a moment.)

So I went home and uploaded my photos, got busy with researching Eliza's story further. Well, just as I had stated before, the house on that property was built in 1859. I didn't know that initially, it wasn't until digging deeper into my research. That was when it dawned on me, "Eliza died in 1856!"
That was three years before the home was built.

According to the Amador Dispatch, Eliza did in fact die during childbirth, but apparently she didn't die on the property itself. It says she was buried on the Brown's property on a "small knoll."

Eliza was the wife of Leon Sompayrac, a native of France, who was not only a jeweler by trade, but also one of the original Trustees of Jackson when the town was first established, as well as a founding member of the Grand Jury. Not much is known about Eliza except that her maiden name was Hart, and she was born July 25, 1835. I could not find a marriage record, nor could I find any record of where Eliza was born or who her parents were. 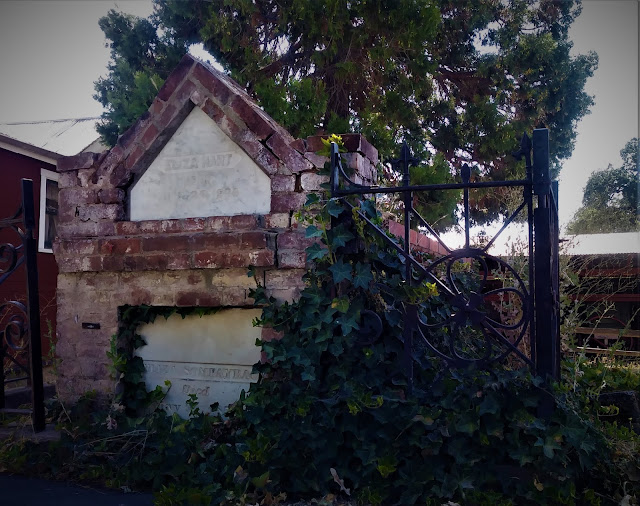 Eliza's grave itself was constructed by brick and covered with iron doors from her husband's jewelry shop. If you visit Eliza's grave (or above-ground crypt) now, you will see there are no iron doors, so either they were removed later or stolen. All that is left is the brick structure and an ornamental iron fencing around part of it, where wandering vines of ivy have crept through and grown quite beautifully around it.

Her marker is a little confusing, because the top part reads:  "Eliza Hart, Born July 25, 1835"
While the bottom part reads: "Eliza Sompayrac, Died May 31, 1856." (both of which are two separate pieces of stone attached to the above-ground crypt).

I searched the only newspaper of the time, the Volcano Weekly Ledger for an obituary or death notice but I found no mention of Eliza's passing. Sadly, it appears that it didn't make the newspapers back then. In newer archived articles of the Amador Ledger Dispatch, there are mentions of Eliza's passing, and the "Friends of the Amador County Museum" sponsored an annual Memorial Day Celebration at Eliza's grave back in 1986. The ceremony took place at 11 a.m. on Sunday, May 25.  The article also stated that the group decided to honor Eliza on her 130th anniversary of her death, and that Eliza died "close to what would later become Memorial Day" and she "was buried on a spot she had loved in life, which was near the site on which A.C. Brown would later build his house."

So, Eliza wasn't buried there because of dying on the property. In fact, there is no documentation that I am aware of that states where she died, although we know it was somewhere in Jackson. However, it was noted that A.C. Brown had her buried on the spot that she "had loved in life."  This obviously means she loved and appreciated that beautiful hillside, just as I do, and it must have been so apparent that she loved that spot so much, that her husband and his best friend A.C. Brown, picked the very best spot that she would want to be buried: right there on that hillside.

Unfortunately, there have been sheds and structures built around her grave over the years, so the view she once saw is not the view we see today. But if you visit the Amador County Museum and you walk that property, you will feel what Eliza felt. The same feeling that I get when I visit, too. It is a sort of soothing calmness that sets over you, and you feel at peace.

After Eliza and her baby passed away, her husband eventually moved back to France. There are news advertisements for Leon Sompayrac's business "Fixury & Company" which he co-owned with Mr. Fixury, closing by mutual consent, and a notice in August of 1857, stating that he would be moving out of the country by August 20, 1857 and any debts owed to him that were not paid by that date would be cause for him to sue. It appears that Leon never came back to the states.

And so, Eliza and her baby rest peacefully in one of the most serene spots in all of Jackson while the world has continued to go on for the past 163 years, mostly forgetting that she is even there. With that, let's remember Eliza (and her unborn child) and their final resting place, so they will be forgotten no more.