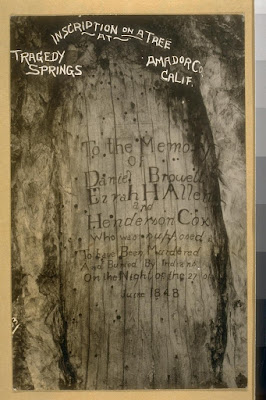 Located on Highway 88, just 3 miles west of Silver Lake, in historic Amador County sits Tragedy Spring. This small spot set just a few hundred feet back from the highway has a dark and somber history for which it gained its name. Though there is a plaque honoring the men who were part of this tragic event, most people do not know much about who they were, or what led up to this event in the first place.

On June 22, 1848, three members of a scout group went ahead of their company of Latter Day Saints clearing a path over Carson Pass, which would come to be known as the Mormon Emigrant Trail. When the scouts were never heard from again, the men in their company began to worry.  Private Henderson Cox, from Warren County, Indiana; Ezra Heela Allen, from Madrid, New York; and Sargeant Daniel Browett, of Bishop’s Cleeve, England were the three men who disappeared.
Who were these missing men?

Ezra Heela Allen, was born on July 28, 1814 to parents Samuel Russell Allen and Sarah Jane Powers of St. Lawrence County, New York. In 1837, Ezra married Sarah Fiske and the couple had four children. He had been serving in the U.S. Army for period of time, and after his discharge he decided to join the scouting group under the command of Sgt. Daniel Browett, who were crossing over the pass while returning to Utah.

Private Henderson Cox, was born on November 6, 1829, to parents Jehu Cox and Sarah Pyle.  When Private Cox was only seventeen, he joined the U.S. Army and went to fight in the war with Mexico as part of the Mormon Battalion, under the command of Captain Allen and Captain Hunt in Company A. After his discharge he met Captain Browett in Coloma and started working at Sutter’s Mill. When asked to join Browett on a scouting mission to travel over Carson Pass in June of 1848, Cox jumped at the chance.

Sargeant Daniel Browett, was born on December 18, 1809 to parents Thomas Browett and Martha Puller. He was a native of Bishop’s Cleeve, Gloucestershire, England.  At the age of 25, Browett started his apprenticeship in carpentry and later joined the United Brethren Church. Besides working as a Carpenter, he also learned to be a joiner and a cooper.  Later, Browett would join the Church of Latter Day Saints and become a Presiding Elder.

From 1846-1847, Browett was called to serve as a commissioned Sargeant for Company E in the Mormon Battalion during the war with Mexico.  Once he was discharged in Los Angeles at Fort Moore, Browett decided to head up north to offer his expertise at Sutter’s Fort, where skilled Carpenters were scarce. He eventually headed up-country further, to a place called Coloma to help build the sawmill for Captain Sutter. Interesting to note, Browett was working under the direction of James Marshall and six others when the first discovery of gold was found in the American River in 1848. He was literally in Coloma when the gold rush began!

After his work was through in Coloma, Browett was sent to inform Captain Sutter that the work was done on the mill and to gather the wages for all workers as well as other furnishings and animals that were promised. While there, he arranged to purchase two cannons from Sutter for the LDS Church in Utah. Interestinly, these cannons are very similar to the one that is infamously known as the “Sutter Gun”, though they are not the same. Although Sutter purchased the “Sutter Gun” from the Russians when they abandoned Fort Ross, the other two cannons purchased for the LDS Church, (a four-pounder and a six-pounder), were said to be among other items Sutter obtained at the Fort at the same time.  As it turned out, the four-pounder brass cannon was not Russian at all, but was in fact cast in Peru in 1792 by the Spanish. Both cannons Browett purchased from Sutter for the LDS Church were said to have been previously owned by Napoleon but had been left behind in Russia before being brought to Fort Ross.  After obtaining the cannons, they were placed in the care of the company that were going to be returning to Utah.

It was then that these three men were sent on ahead to scout the thick forest and rocky terrain ahead of the road crew who were planning on clearing a trail from the Mormon Camp in Sly Park up through the Carson Pass.  The three men left on June 22, 1848 and never came back. By mid-July, a follow up road crew who had cleared a good 10 miles on the path found a dead campfire and a pile of rocks that appeared to be a shallow grave. The men returned to their main camp and told of their discovery, to which more men came to investigate the site.  On July 19, 1848, they removed the pile of rocks to reveal the bodies of their lost party members: Browett, Cox and Allen.

Browett had been murdered with a hatchet, and shot in the eye, while his other friends had been shot with arrows. It also appeared that they had been beaten over the head with rocks, as the rocks buried with their bodies were stained with blood and chunks of hair was stuck to them.  All of their weapons, supplies, horses and money was gone, all except a small pouch of gold that Allen would wear around his neck. It contained $120 worth of gold dust, but it appeared the strap had been severed and flung into a bush, possibly during the fatal struggle.

After the gruesome discovery was found, a member of their party, James Sly mentioned that on his way back to camp they passed many Indians and one of the natives was wearing a vest that looked familiar. It later donned on him that vest belonged to one of his fallen friends who died at Tragedy Spring. From the evidence of the arrows and the hatchet, and the native wearing one of the victim’s vests, it wasn’t difficult for the group to put two and two together and realize that Browett, Allen and Cox had been ambushed by Indians.

That night the party who discovered the ghastly site, worried for their own safety as well, as journal entries noted in the book, “Mormon Battalion: United States Army of the West, 1846-1848” mentions that night the cattle they had with them were spooked and literally causing a stampede. The party believed Indians were around and so they fired their cannon once to scare them off. It mentions that the rest of the night was quiet and they had guards posted, but the party members still had a hard time sleeping.

Before moving onward, the corpses of the victims were reburied in a more honorable way, and Wilford Hudson carved a beautiful epitaph into the side of a large Fir tree nearby the graves.  It read:
“To the Memory of Daniel Browett, Ezrah H. Allen, Henderson Cox, Who was supposed to have Been Murdered and Buried by Indians On the Night of the 27th June 1848”— And that was how the name Tragedy Spring came to be.

As the years went by, the tree was later cut down, and the part that contained the carved epitaph was sent to the museum at Marshall Gold Discovery Park in Coloma to be put on display. Later the tree stump was treated with a resin to harden the stump, in order to preserve it from decaying.  In 1967, the International Society of Daughters of Utah Pioneers who attached a bronze plaque on a large rock that had been placed on top of the victims graves.

Today, you can take a trip up scenic Highway 88 and stop off at the picnic grounds and pay your respects to these three men who died at the spring in 1848.  You can also visit the Marshall Gold Discovery Park in Coloma and see the originally carved epitaph for these three men.

A big THANK YOU to Shirleen Craig Farley for her allowing me to mention some of the information from her own research as well as her own family records that belonged to her grandmother.