Situated under a large oak tree in the Rocklin cemetery sits the Chateau family plot. The little obelisk which marks the spot where many of the Chateaus are buried does not have any marker or engraving other than their last name, leaving no trace of the terrible scandal that rocked many of the communities in Placer County the Spring of 1910.

John M. Chateau, an employee of the Southern Pacific Railroad, met a tragic ending on May 19, 1910 after he was unable to recover from a gunshot wound inflicted nine days earlier. As it turned out, Chateau’s wife, Mary Ann, had reportedly been carrying on an improper relationship with one of her husband’s co-workers — a brakeman known as Michael Leahy — who became infatuated to the point of begging Mary Anne to run away with him and elope. Although there is no way to know how far Mary Ann allowed the affair to go, it seemed to go far enough to morph into a dangerous fatal attraction. After Mary Ann refused Leahy’s proposal, the jilted man threatened to kill her, giving her one more day to change her mind.

MaryAnn went to her husband to admit the affair and Leahy’s threats, prompting John Chateau to turn to the police. Records indicate a warrant was sworn out for Leahy’s arrest on charges of disturbing the peace. It was believed that Leahy left Roseville and that would be the end of it.
This was not to be. 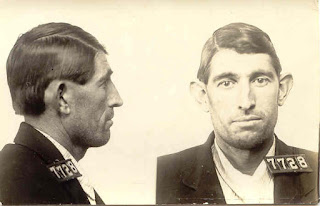 In the early hours of May 10, Leahy sneaked onto the Chateau property and hid in the woodshed outside. When John Chateau strolled out in the morning to retrieve firewood, Leahy took aim and shot him. While John Chateau lay there bleeding, Leahy went over and picked up an axe, intending to finish the job. Yet several neighbors had heard the shot and quickly got involved — tackling Leahy to the ground and holding him until authorities arrived.

Leahy remained jailed in Roseville for several days until the news came that John Chateau passed away from his injuries. The San Francisco Call newspaper mentioned that anger towards Leahy in the Roseville community was so intense that a lynching was feared. Sheriff McAuley moved Leahy to Placer County’s seat in Auburn and announced that he would “use every possible means to protect his prisoner.”

When the charge of murder was added to Leahy’s case, the suspect was quoted as saying, “I blame the woman for this trouble. I asked her to elope with me and when she refused I found it necessary to kill her husband. I would have killed any other man just the same.”

Such words didn’t help his case.  Leahy tried to claim self-defense, saying that John Chateau shot first at him when he saw Leahy stooping down in the back of the woodshed. Witnesses to the event claimed the only shot that was fired was the fatal one that ended Chateau’s life.

The expeditious murder trial was held in Auburn, lasting only about six hours. It took less than 30 minutes of deliberations before the jury came back with a verdict. On November 23, 1910, Michael Leahy was convicted for the murder of Chateau. In court, before he was sentenced to die at Folsom prison, Leahy declared, “If I am hung, I’ll come back after I am dead and get even with some of these people who have been prosecuting me.”

In the book, “Folsom’s 93,” author and historian April Moore sheds light on Leahy’s story and his last days leading up to his execution. Moore’s book delves deep into Leahy’s saga.  Moore writes in “Folsom’s 93” that during the time Leahy was awaiting trial, he refused to sleep or eat, paced in his cell and cried himself into exhaustion, leading others to believe that he was insane. However, by the time the moment came for his execution on Feb. 8, 1911, Leahy’s attitude had changed significantly. It appeared he had accepted his fate.

“He spent his last evening telling stories to the evening watchmen about his time as a brakeman for the railroad,” explained Moore. “The papers even mentioned that he woke in good spirits and even joked with the Warden for a while.”

The San Francisco Call said that when it came time to take his long walk to the gallows Leahy met it with a “cool indifference that had marked his actions since his arrest.” He did not wish to speak to the reporters, nor did he have anything last words to say or requests to make to the staff at Folsom Prison.
At exactly 10:30 p.m., the trap was sprung and nine minutes later Leahy was dead. According to records, it was the quickest execution on the gallows at Folsom during Warden John Reilly’s term. After Leahy’s body was released to his family, it was brought to the cemetery in Rocklin and interred in the Leahy family plot.

In an ironic twist of fate, just as Leahy had vowed to haunt those who prosecuted him when he was alive, it turned out that Leahy’s final resting place is within eyes view of his victim John Chateau’s grave.  In the end, Leahy didn’t get the last laugh, in life or the afterlife. Instead he’s been doomed to spend eternity buried next to the man he murdered — an eternal reminder of why he lost his own life.

Previously published in the Roseville Press-Tribune in 2014, written by: J'aime Rubio


(Copyright 2014- www.jaimerubiowriter.com)
--
Publisher/Editor's Notes: This is one of a series of articles that I wrote for the Roseville Press-Tribune several years back when I used to write the historical articles for them.  According to my old editor, since I wrote the content I can repost the articles. I also obtained permission by Gold Country Media a few years back to republish my stories, too.