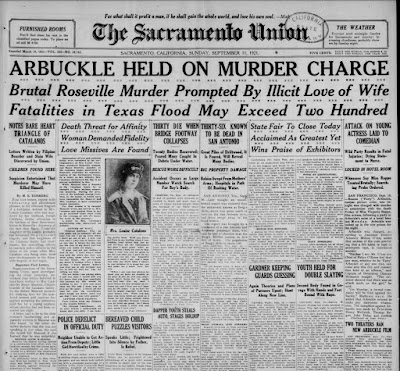 The “Good Samaritan” parable is as familiar as ever, and it still comes to mind when people discuss the choice of getting involved in someone else’s ongoing domestic strife. On a September afternoon in 1921, a Roseville woman faced that very dilemma when she heard blood curdling screams coming from her neighbor’s home. 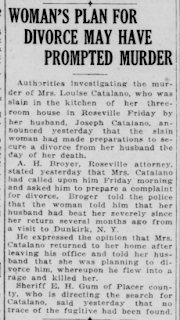 The woman, whom newspaper accounts referred to as Mrs. Kruse, knew there was a reoccurring issue at the nearby Catalano home. Kruse decided to call the Roseville city clerk and demand to know what she needed to do to stop a man from continually abusing his wife. Kruse made it clear the screams suggested Joseph Catalano may end up killing his spouse. The city clerk was reportedly not too worried, simply relaying a few technicalities to the caller. Frustrated with the runaround, Kruse phoned police directly a number of times.

A law enforcement officer eventually paid the Catalano home a visit – setting off a chain of events that lead to discovering a bloody, gruesome mess. Investigators would come to realize that Louise Catalano had been viciously murdered by her husband during the interim that Kruse was trying to bring help to the property.

Joseph Catalano was an Italian immigrant from New York. Journalism of the era indicates he had a long history of abusing his wife. The couple had four daughters: Mary, Josephine, Carrie and Rosa. In February of 1921, the family relocated to Roseville after Joseph was offered a new job at the Pacific Fruit Express Company. The Catalanos had not even been in Placer County for 8 months when the slaying took place.

Investigators soon learned that, before law enforcement arrived, Kruse had been watching out her own window and noticed 7-year-old Mary Catalano run outside with “a look of unspeakable horror on her face.”  Kruse also mentioned hearing the girls’ cries to her father, asking him not to hurt her mother.


After the killing, Joseph Catalano thoroughly cleaned the home and then refused to come to the door when the officer knocked. At first the lawman assumed no one was home and left. Again Kruse found herself calling to convince police to return to the scene. When an officer made a second visit, Catalano and his four children were long gone.

At that point, investigators began searching the property and found a suspicious trunk. Opening it unveiled a ghastly sight: Louise Catalano’s badly mutilated body was stuffed inside. According to the Sacramento Daily Union newspaper, Joseph Catalano had severely broken his wife’s body, slashing, hacking and choking her in “one of the most gruesome murders in criminal annals.”

Even Placer County Deputy Coroner West claimed that the crime was “most revolting in its cruelty.”  Placer County coroner deputies found an axe in the kitchen, which they believed was one of the weapons used in Louise’s murder. They also found love letters between the deceased woman and a man named Mateo Manreal, who had been a boarder in the Catalano household.

Manreal worked with Joseph Catalano at the Pacific Fruit Express Company. The revelation of a love triangle gone wrong elevated the murder into the pages of newspapers across California. Four of the letters were published in the Sacramento Daily Union, outlining an affair that had reached a point where Manreal was trying to take Louise away from her violent marriage. The letters also hinted at Louise’s own jealous, insecure and volatile personality, including the married woman threatening to kill Manreal if he should be unfaithful to her.

It appeared that the many years of emotional and physical abuse Louise received at the hands of her husband created her own dysfunctional mindset. Newspapers soon had another development to report when Roseville attorney A.H. Broyer came forward to say that on the morning of the murder Louise Catalano visited him to request help in filing for divorce.

Meanwhile, the search for Joseph Catalano continued. After fleeing Roseville with his four daughters, Joseph abandoned the children at a storefront in downtown Sacramento. An eyewitness later told police of seeing the wanted man turn to walk away from the girls, only to rush back to kiss and hug them before trying to leave again.

The scene reportedly went on for several minutes before Catalano finally disappeared. A concerned family on the street took the girls in for the evening without knowing they were connected to the slaying in Roseville. When news broke, authorities arrived to interview the children. Mary, the oldest daughter, refused to speak and was likely traumatized.

The heinous nature of Joseph Catalano’s crime quickly made him one of the most wanted men in the state. Trains, hotels and ports were actively searched in hopes of finding him. Media accounts of the day indicate that many assumed Catalano had jumped on a ship to Italy or possibly headed back to friends and family in the Italian boroughs of New York. Records indicate he was never seen again.

After speaking to members of the Catalano family in 2017, it is believed that Joseph evaded capture with help from friends and family in the area, who kept him hidden until he could move elsewhere. Allegedly he hid out on a farm in Weed, California and remained in the United States, living as a wanted man for the rest of his life.

Although Mrs. Kruse’s attempts to save Louise Catalano on that violent day in 1921 were unsuccessful, her efforts did shed light on the crime for police, as well as force newspapers, local authorities and California officials to see how serious – and sometimes fatal – domestic disturbances can be.

Publisher/Editor's Notes: This is one of a series of articles that I wrote for the Roseville Press-Tribune several years back when I used to write the historical articles for them.  According to my old editor, since I wrote the content I can repost the articles. I also obtained permission by Gold Country Media a few years back to republish my stories, too.

A more in-depth take on this case can also be found in the book, “Stories of the Forgotten: Infamous, Famous & Unremembered,” by J’aime Rubio.
Photo: Sac Daily Union, September 11, 1921