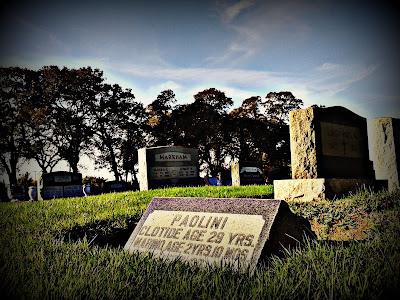 Not known for the kind of frequent scandals and murders that made San Francisco, Chicago and New York infamous, Roseville’s small railroad town appeared for much of the century to be far away from “the riffraff” that inhabited the larger cities. Or was it?  In the fall of 1916, Roseville became infiltrated by fear, terror and shock when the news broke of a double-murder involving a young mother and her child.

According archival reports from the Roseville Register, the story began Sept. 26 of that year, when Italian immigrant Musco Paolini claimed he'd left his home north of Roseville Union High School and headed down to the local butcher shop. Paolini made a meat order to be delivered to his doorstep, but when the butcher’s delivery boy showed up no one was home. Paolini himself later arrived home to find the dwelling empty. He originally assumed his wife, Clotide, and his two-year-old son Marino, had gone on a walk. After hours passed Paolini began to worry.

Getting in touch with his brother, Paolini also notified Roseville Constable Lou Hoke to aid in the search for his family. Newspapers recount that they canvassed the surrounding areas well into the night. Around 10 p.m., Hoke announced he was finished searching for the evening, though the Paolini brothers continued on.

Around 2 a.m., the lifeless bodies of Clotide and Marino were found at a creek bottom in the ravine. Placer County Sheriff George McAuley was called to the scene to investigate. McAuley quickly noted that both of the victims had been shot in the head. It appeared there were no signs of a struggle, and that the two had been brought to the creek and dumped. Their faces also had powder burns, which McAuley knew meant their killer shot them at close range.

When the story made newspaper headlines, it immediately instilled panic in the surrounding neighborhoods. It is clear from existing records that the people of Roseville wanted to know who could have done this heinous act, and more importantly, why?

When the sheriff began questioning Paolini, he insisted he had no idea who would want to hurt his family. Neighbors reported that they saw no one visit the home, nor did they glimpse anyone leave it. It was as if Clotide and Marino had simply vanished prior to their killings. However, the backyard offered a slight clue in the form of a pile of dirt, indicating Clotide may have been interrupted while sweeping around the time she disappeared.

McAuley, his deputies and Placer County District Attorney John Landis continued to be confronted by questions that were increasingly hard to answer. At one point the sheriff mentioned to reporters that he believed the murder could be connected to La Mano Nera or “The Black Hand.” There were many Italian immigrants in Roseville at the time, and it wasn’t too far from San Francisco, a place widely known for mafia-related connections.

McAuley never elaborated on why he suspected the Black Hand, though his mention of the group was enough to make rumors swirl in Roseville: Could someone have been extorting Paolini? Did the Italian have unknown ties to the mafia? Did the immigrant know more about his wife and son’s deaths than he led on to?

After further research into this ninety-nine year old cold case, I have found that there was a prime suspect in the murders and his name was Anthony Avina (aka Antonio Avania). According to archived accounts in the Sac Daily Union, Avina’s statements to authorities were conflicting. He was also caught in a lie when questioned about his whereabouts at the time of the murder. After interrogating him, Sheriff McCauley and District Attorney Landis were convinced that he had committed the murders but didn't have enough evidence to convict. It appears that no more was done and that Avina was not charged or convicted for the murders.

Roseville city records show that Clotide and Marino were buried together at the Roseville Cemetery, which was very close to their home. Now the only reminder of their existence — and the cold, calculated act that ended them — is the small block of stone with their names and dates etched into it. It sits quietly in the cemetery, unable to tell us what really happened on that day in 1916.

Publisher/Editor's Notes: This is one of a series of articles that I wrote for the Roseville Press-Tribune several years back when I used to write the historical articles for them.  According to my old editor, since I wrote the content I can repost the articles. I also obtained permission by Gold Country Media a few years back to republish my stories, too.
Posted by J'aime Rubio, Author at Saturday, April 04, 2020