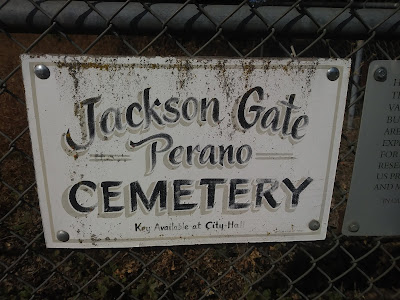 The city of Jackson, located in Amador County is one of the most beautiful and historic areas in the gold country of the Sierra Nevada mountains. A place where history can be found literally everywhere you look, and step. It's no wonder then that even the simplest places could hide a story, and a history, time itself has forgotten. Located just outside of town sits an old, abandoned cemetery. A sad and lonely space of land, bedraggled and overgrown with weeds, rocks, dirt and debris, this cemetery is truly an archaic reminder of those departed souls who pioneered this land long before us.

The cemetery, so small if you blink you will literally pass it, has proven to elude many citizens in this county for years. Honestly, I didn't even realize the cemetery was there at all, until recently when I spoke with my friend Amy Doran. It was then that I learned of this very unique and special place. You see, Amy drives down Jackson Gate road every day to and from work, and she contacted me to ask if I knew anything about the small cemetery on the side of the road with one lone grave. She wanted to know who was buried there, and why was it so neglected? It seemed abandoned and very gloomy, and immediately I was intrigued. I didn't know of a separate cemetery on Jackson Gate Road, so I did some digging and came up with some very interesting history.

First off, before Amador County was established in 1854 it once was considered a part of Calaveras County. So I am assuming that the burials on this plot of land were considered residents of Calaveras when they died, because this cemetery appears to pre-date Amador County itself. From what I could find, there aren't a lot of records, if any, that tell us who might be buried under that hallowed ground except for one burial, Thomas Tormey.

The lone standing marker, which is said to be the oldest burial marker in all of Amador County, sits weather beaten and worn by time and the elements. It once read: "Thomas Tormey, native of Ireland, died October 9, 1850."  Thomas was about 29 years old, so his year of birth should be about 1821. Not much more is known about Thomas, such as how he died and if he had any family in the area. Unfortunately, there were no local newspapers that I can find in circulation in the area back then, thus no obituaries available since the Volcano Weekly Ledger (Amador County's first newspaper) didn't even begin until October of 1855, and the Calaveras Chronicle started a year after Tormey's death in 1851.

After making a small post on my Facebook, several friends wanted to get involved in the hunt to find out who Thomas was, and where he came from.

Friend and fellow genealogist, Debbie Lowe Myers found an immigration record for a "Thomas Tormey" from Ireland, born in 1821, who landed in New York on July 18, 1849. He also came with a Mary Tormey, age 21. Could this be our Thomas? It is possible, but there really is no way to tell for sure.

I did find a notice in the Daily Crescent newspaper in New Orleans dated January 4, 1850 noting that there was a letter for Thomas Tormey waiting at the post office for him to pick up. Could Thomas Tormey have traveled from New York to New Orleans in order to take a steamer to Panama, via the Isthmus and traveled to California? Well, we know he had to have come one way or another, and at that time period, you usually crossed the Isthmus or took a ship around the Horn. But again, since I couldn't locate his name on any of the ships manifests to San Francisco, I cannot confirm how he got to California. He could have came over the mountain range via a wagon train, which was also another way settlers managed their way to the west.

Then another Facebook friend and fellow genealogist, Sharon Healey Bartholomew found a Thomas Tormey born in 1818 in Westmeath, Ireland, the son of Bridget and Edward. Who died on October 11, 1850 in California at the age of 32. Could this be our Thomas?

Besides Thomas being buried at the cemetery, past archived records of the Ledger Dispatch state that in all there are about 30 burials on that piece of land. Again, there is no mention on the plaque outside of the cemetery of who is buried there or how they died; however, the fact that the land belongs or belonged to the Perano family, and being that there are numerous amounts of Perano's buried at other cemeteries in the area, it leads me to believe other earlier members of the Perano family were more than likely buried here in their own family cemetery.

Again, as I mentioned before, back in 1997, 1998, 2003 and 2004 there were articles in the Ledger Dispatch that mentioned an effort to restore and preserve the cemetery.

Sadly, time went on, and with it went the drive to keep this cemetery maintained. Since then, people have passed on, others became busy with their own businesses and lives, and little by little the cemetery became forgotten once again. My hope is that this time the community will work together to not only restore the cemetery once and for all, but keep it preserved.

Thomas Tormey deserves a proper headstone marking his grave and all the other forgotten ones buried within the property should be mentioned on some sort of memorial marker as well. It is my hope that we can make this happen somehow, some way.

I have recently contacted several people at the Ledger Dispatch as well as a reporter at the Sierra Lodestar. I am waiting to hear back from them, and maybe we can get the ball rolling with some attention being brought back to the cemetery again.  I also plan on contacting the City Cemetery Committee at City Hall as well as the local Boy Scouts, Masons, Odd Fellows and the local VFW Hall to see if any of these groups would be willing to join in on the effort to preserve what should be known as Amador County's oldest cemetery. Hopefully this idea will get the community's attention and action can be taken to move forward and honor these forgotten ones buried and abandoned for far too long.