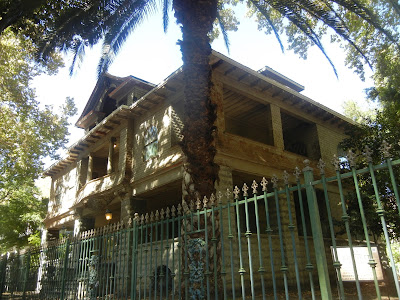 It's that time of year again, when people start looking online for creepy, haunted houses to go drive by or explore. Never in my wildest dreams would I have imagined that one of my earlier blogs Hart Mansion Secrets, which went in depth about the history of the home at 2131 H Street in Sacramento, would get so much traffic over time. What is sad to me though, is that despite the fact I have debunked the whole "haunted" theories that have circulated the internet (and even news segments on television), the public just seems to love to ignore facts and instead believes pure fabrication. It is a disgrace not only to the history of the home, but to its inhabitants over the years.

The man who had the gem of a manor constructed was Aden Cavins Hart. He hired Alden Campbell to design the home, which if you really take a good look at, has a very interesting and seemingly intentional off-plumb design. Facing the home you see that the front door and porch is not even with the pillars, nor is the steps going up. Upstairs porch has a few windows that are not evenly aligned with the home, making the exterior quite unique. Naturally, everyone is used to things being symetrical to look normal, thus the reason perhaps people get an odd feeling when staring at the home is because their brain sees the
asymetry, and subconsciously thinks it looks a bit "off." Personally, I find the home quite gorgeous and if given the chance I would love to live in it!

The current owners, the Amoruso family, have held this home in their family estate for over 60 years. They are the second owners of the home, after the original owners, Aden and Alice Hart.  I have spoke with Peter Amoruso for several years about this property. The home is NOT HAUNTED and is NOT called the Martinez House. 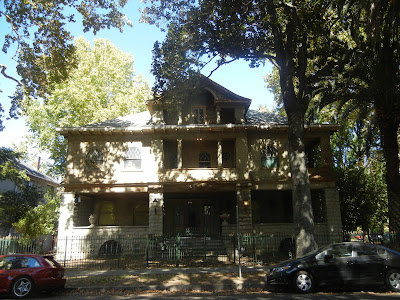 This beautiful, stately manor is the Amoruso family home, and one that they love and plan on keeping. From my research online I see there has been a lot of busy-body nuisances within Sacramento who have tried their best to cause problems for the Amoruso family, claiming the home is an eye sore, that it is unsafe, neglected, abandoned or downright in "danger of demolition." If you ask me, it is a bunch of nosy people unecessarily involving themselves in other peoples business with too many rules and regulations for homeowners.

The home is not structurally unsound, nor is it a danger to anyone. It just needs some TLC to maintain it's beauty for another 100 years. But of course there always has to be someone out there making a stink about something.  Bottom line is that the home is lovely and is a historic part of Sacramento, and one that belongs to the Amoruso family and no one else. I stopped by there yesterday and took some photos, and it appears the Amoruso's have been busy working on the home, and it is looking terrific so far! With that being said, I strongly suggest anyone who wants to view the exterior of the home, to show respect when driving by or stopping to take photos.

History of the Original Owners

Aden Cavins Hart was born on May 7, 1868, in Colusa County, California, to parents James Hart and Sarah Owen Cavins. His older brother, E. C. Hart, grew up to become a Judge on the Third District Court of Appeal and Senator. Aden was not new to the Judicial System, it was in his blood. His two uncles were judges in Indiana,  Chief Justice Rhoades and Judge A. G. Cavins, as well as his grandfather, S.K. Cavins who was a prominent Attorney in the same state. It seemed though Aden had other career plans in mind. His heart was in medicine.  Hart attended and graduated from Stanford University of Medicine (Cooper Medical School) and returned to Colusa to start his practice. He married Alice Harvey-Chase and took in her son (from previous marriage) as his own, Lloyd Chase. The two never had any biological children of their own.

Before 1900 he moved the family to Sacramento and went on to become one of the most prominent of surgeons in the area. Besides his work as a surgeon and physician, he worked diligently helping to form and organize various medical groups which preceded the Sacramento Society for Medical Improvement, to which he was President.

Hart did not solely rely on the education earned at Stanford, but took the opportunity to travel the country and abroad to continue his education by way of real experience in the field. He was close friends with the Mayo brothers who founded the Mayo Clinic, as well as being strongly associated with Johns Hopkins Hospital.

By 1926, Hart was elected an honorary member of the American College of Surgeons, in recognition for all his services over the years. Besides the work he did around Sacramento County, he always found time to help charities as well as being a member of several fraternal orders such as: Sacramento Commandery No. 2 Knights Templar, Union Lodge of Masons No. 58, the Ben Ali Temple of the Shrine, and Sacramenton Chapter No.3 Royal Arch Masons.

When Dr. Hart retired, he and his wife, Alice moved to San Francisco to be closer to their son Lloyd, and his family. Dr. Hart passed away in the bay area on August 27, 1954. Alice died a few years later in 1957 and both were interred at East Lawn Cemetery in Sacramento.

When I do a simple "Google" search on this home once a year, I always find post after post about the home being haunted. Not only that but I find so many times that people are disrespecting the memory of Dr.Hart and his family. There have been many lies spread about Dr. Hart, claiming that he was a murderer, that he did experiments in his basement, killed his family, etc. Not one single bit of any of those preposterous stories is true. I am thoroughly disgusted with people who continue to spread such erroneous and slanderous information about a man who was pioneer in Sacramento history.

When looking into the history of this home, please show respect. Dr. Hart and his family were decent, upstanding people of this state and should be remembered as such. Dr. Hart did so much in his life, spending most of his life helping others. He was one of the original founders of Sutter Hospital and gave a lot of time helping charitable organizations. He was not an evil, murderous, mad scientist as some of these unbelievable internet sites claim.  As I always tell people, do not believe anything you hear and only half of what you see. Fact is always better than fiction, and it is important that when telling the history of a person, place or thing, that you actually do the research before regurgitating the same old information blindly. You owe it to the person you are speaking about to tell their story correctly, and with respect.

All photos are the property of J'aime Rubio-- copyright protected.