This monument sits at one of the higher points of the Historic Sacramento City Cemetery. Facing east on the northern section close to the Broadway entrance, it's ornate tile design is what caught my eye the very first time I walked by it.  The sheer beauty of the monument is equally matched with the sudden feeling of sadness upon closer examination. It isn't just a sadness solely because of the tragic back story of the grave itself, but also the painful realization knowing how horribly this grave has been treated over the years. If we could have only seen the monument in its full splendor back when it was constructed, then we would be able to fully realize the love and craftsmanship -- literally blood, sweat and tears, it took to create such a masterpiece.

The monument was built for Georgia Fisher, a young lady, only 19 years old at the time of her death. The man who built her beautiful memorial was none other than her devastated groom-to be, Martin Bergman. The couple were to be wed on New Year's Day in 1876, but Georgia passed away just days before the wedding, on December 27, 1875. 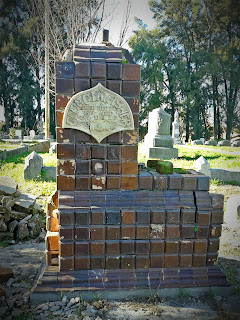 Georgia Fisher, or "Georgie" as she was sometimes called, was the only daughter of George Fisher and Narcissus Tucker. Born on February 25, 1856, in Louisiana, it appears that Narcissus brought Georgia with her to Arkansas at some point shortly after her birth, as the Tucker family: William Tucker and Paulina Adelina Humphrey-Tucker (Narcissus' parents), all traveled together in an ox-team of settlers across the plains from Arkansas to California around 1857-1858. Although I could find no records of a divorce or death, I believe George Fisher more than likely died, leaving Narcissus a young widow.

It was after getting to California that Narcissus, a young single parent with an infant child to raise, married Thomas Kirtlan, a Blacksmith by trade. Their marriage date is estimated at around 1858, when Georgia was 2 years old. Kirtlan had originally been born in England, but came to the United States with his parents across the Atlantic as an infant. He was raised in Ohio, and there he learned his trade. By the time he was 19 years old, he traveled to California, via the Isthmus of Panama and settled in Jenny Lind (Calaveras County). He would remain there until 1869, when he moved his family to Sacramento to set up his new shop on Twelfth and K Streets. Eventually the family moved again, this time to Freeport, just south of Sacramento, along the Delta, near the other small towns of Clarksburg, Locke and Walnut Grove. 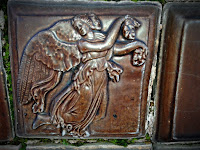 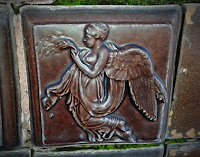 Georgia was the eldest half sister of nine children born between Narcissus and Thomas Kirtlan. Around the age of 17 (1873-74), Georgia left home and went to work as a hired domestic for the Bergman family in Sacramento. Other records state that she had only been in the employ of the Bergman's for five months before her death, which would mean she came to work at the household at the age of 19. It is uncertain the exact date that she came to be employed in the Bergman household, but the fact remains that by 1875, she was working there.

The Bergman sons, Johann and Martin, had came to California from their native Sweden in the late 1860s, after having been so impressed by a sample of California clay they had seen in Stockholm. The two potters were convinced that their future was in America, so they left everything behind to start a new life. The journey was long, crossing the Atlantic and then walking the Isthmus only to board another steamer to San Francisco, but their determination was unshakable.

After settling in Sacramento, the two brothers set out to buy out their competition, Sacramento Pottery. The Bergman's began prospecting, not for gold, but for clay, finding a rich deep pocket of the best clay at Michigan Bar and Cook's Bar in Sacramento County (near Rancho Murieta). In fact, according to The History of Sacramento County, California, by G. Walter Reed, Michigan Bar was thought to be "the best bank of clay for pottery" in the entire state. The Bergman brothers became so successful that they paid for their parents and siblings come to California from Sweden. 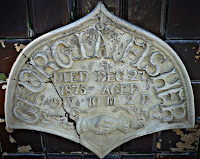 According to an article from the Sacramento City Cemetery's website,  Georgia was hired by Mrs. Bergman, Martin's mother. Their home was located at 30th and N. Streets in Sacramento.  It appeared that Martin Bergman fell for the young lady while she worked in their household, and although he was much older than her, Georgia reciprocated the feelings.  According to a quote within the article, from a Bergman descendant, Pat Pors, it appeared that the family was quite happy with the union of the two, and they were preparing for the holidays and the upcoming nuptials said to have been scheduled at the Presbyterian Church (13th & N Streets) on New Year's Day.

At some point during the hustle and bustle of getting so much done to prepare for the festivities, Georgia fell ill. Some say she died from typhoid pneumonia, while another genealogical report by Charles Wm. Berberich, another Bergman descendant, listed her cause of death as diphtheria or brain congestion/meningitis.  I could not find any death record for Georgia, so I am undecided on which cause of death is certain. Either way, we know she fell ill and passed on December 27, 1875.

Martin was devastated at the loss of his beloved Georgia, and so in his final act of everlasting love, he chose to construct for her the finest monument, made from the best materials, by his own hand. It was said that he worked tirelessly with tears streaming down his face to create a memorial worthy of Georgia, who undoubtedly was the love of his life.

The plaque erected by the Old City Cemetery Committee in 2010, sits in front of the monument and summarizes the tragic love story for passersby to learn while strolling through the cemetery.

According to the plaque, "Shortly after Georgia's death, Martin, together with his father and brother, created this monument on her grave site. Martin, a Swedish immigrant sculptor, constructed the ornately tiled base. His father, John Bergman, added a statue of the angel Gabriel. Martin's brother, John, created an equally beautiful column. Together, they built an ornamented clay pedestal fence around the plot.

Georgia's picture, in repose, was placed on the monument beneath the angel. Over the years, vandalism, theft and natural forces have taken their toll on the monument, leaving only a shadow of its original beauty."---

According to the online records posted by Charles Wm. Berberich, he quotes a letter that Georgia had written but never had a chance to send that described Martin in her own words, "a gentleman in every shape and manner...honest and of good principles....He is in business with his brother and another man, but it is good business and pays pretty good. It is the pottery business...he is not rich neither is he well off but he has good health and understands his trade well. He is about 31 years of age and his name is Martin L. Bergman. He weighs about 160 lbs and has long dark beard and dark hair and blue eyes." ---

Martin waited nearly 20 years before allowing himself to marry, in the 1890s. But even so, it appears that he and his wife became estranged over the years. When Martin died in Spokane, Washington, in 1920, he left all his estate to his only daughter, and nothing to his wife. Martin Bergman was a very prominent potter and sculptor who truly made a name for himself in his lifetime.

To date, the only known photo of Georgia Fisher is the one that was taken after her death.