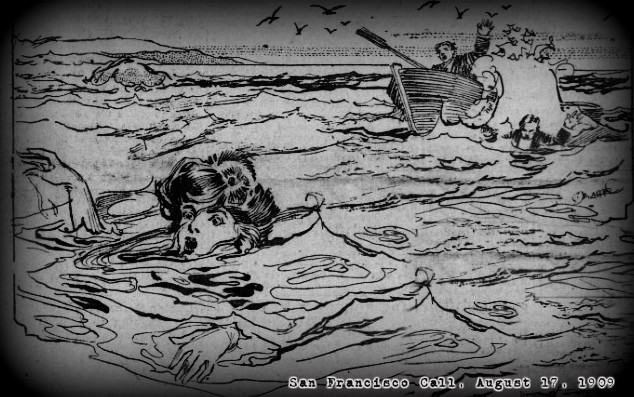 
The Ghirardelli family had its share of tragedies,  one of which was the death of Domingo Ghirardelli's granddaughter, Alida Ghirardelli. The eldest daughter of Domingo Jr., and his wife Addie Cook Ghirardelli,  Alida was born on September 3, 1879, in San Francisco, California.  The heiress of such a prestigious and wealthy family, Alida had all the luxuries one could ask for in her young life. She went to the best schools, she enjoyed the company of high society and traveled abroad in her study of fine arts.

According to the book, “Carmel-by-the-Sea, The Early Years,” by Alissandra Dramov, Alida studied her art with her aunt and uncle, artists Angela Ghirardelli Jorgensen and Christopher Jorgensen, first in San Francisco, and furthered her studies in Paris. From 1901 to 1906, Alida lived in Paris, mastering her craft. The talented young artist drew acclaim in her own right,  which is shown through newspapers and various periodicals, including the 1907 issue of “Western Woman,” which gave her praise for her painting titled “Interior of a Barn.”  The article mention reads, “it is the best thing this very promising young woman has done. Mechanically good, the composition, tone, color, make it a notable little canvas.”

The tragedy that took her life, occurred on August 16, 1909, off the coast of Carmel-by-the Sea.  Just a few months earlier, Alida had returned to Carmel, where her aunt and uncle Angela and Christopher Jorgensen were living.  At one time Alida was living with her aunt and uncle at their stone mansion which is now part of La Playa Hotel, but the month prior to Alida’s death, she was actually staying at the Pine Inn about a half mile away. The Inn was known for accommodating eccentric writers and artists who came to visit and stay in Carmel during the Bohemian era.  Alida was known for taking a daily swim in Carmel Bay and was just continuing with her normal routine when the tragic drowning occurred.  Eye witnesses claimed that she had swam past the breakers. It had appeared as if her intention was to let the current take her towards Point Lobos , but that suddenly her hands went reaching upwards, in desperation for aid.

It was then that two good Samaritans, Robert Mitchell and another man only known by the name Hitchcock, dragged a boat over from the shore near the Pine Inn and  launched it into the breakers. They“bent their backs to the oars,” but as the article mentions, “the feat was impossible.” Seconds after the two men had launched the row boat into the water, the waves heaved it upside down.  Hitchcock remained hanging onto the overturned boat, but Mitchell attempted to swim under the waters in search for Alida but eventually rose to the surface minutes later, having nearly drowned himself.

Alida’s aunt and uncle were vacationing in the Yosemite Valley at the time and were unaware of the tragedy that had just occurred on the shores near their estate. Her parents were notified within hours of the incident and made the trip from San Francisco in hopes her body would wash ashore.  The family, desperate to bring their daughter’s lifeless body back home to be buried, kept a vigil along the beach and other residents set up bonfires along the shore in aid to search for Alida.

Reports showed that “the countryside, from end to end, is tramping along the beaches, hoping that each successive wave will return that for which they search, and the sea, satisfied with the sacrifice which it has taken unto itself, offers as its smallest consolation the inanimate form of its victim.”

It was said that Alida’s father, Domingo Ghirardelli Jr., sat on the beach all night, no doubt hoping and praying that the waves would bring his beloved daughter’s body in with the tide. It didn’t take long after the news got out about Alida’s tragic death for rumors to spread insinuating that her fatal drowning may not have been as accidental as previously thought.  Speculations swirled around various social circles, making its way to the San Francisco Call and Oakland Tribune, claiming that Alida may have purposely drowned herself over a broken heart. The Oakland Tribune dated August 29, 1909, stated,

"It may be news to some of her friends, who heard the several rumors which followed her tragic death at Pacific Grove, that she had a hidden romance; that she had been in love with a well-known American of the United States in Paris. The young man was known to be in love with her and she with him. The smoothness of their love story was marred by the doubt of a parental consent on her part to a marriage. Their intimates in Paris knew the love story and knew that she came home to gain the needed, "God bless you, children," from her family."---

As the article goes on it mentioned that the American with whom Alida allegedly fell in love, had proved unfaithful to his promise to marry her, and in turn, married another while she was away. It was speculated by the press that this was the reason she drowned herself. What is interesting to note is the fact that certain eye witnesses to her drowning came forward to mention that just two days prior to the fatal drowning, Alida had been pulled from the very same surf unconscious. Mrs. F.B. Signor, the keeper of the bathing pavilion on the beach stated that she "grew alarmed" after the first incident and trained her collie dog to swim after her, "fearing the accident which ultimately took place."

When asked for a statement for the press, Alida's brother, Edwin Ghirardelli declared, "It is folly to think that she committed suicide. All her letters to us radiated happiness and pleasure. She did not have a single care and no reason to take her life. How these rumors started I cannot imagine, but I wish to deny them emphatically. They are unjust to my sister and cruel in their origin."

Regardless of whether or not there was truth to the rumors, they still persisted for months, leaving many to wonder if there was some truth to their theories of why she died after all.  We will never know for sure, being that the young American suspected of leaving her for another was not named in the newspapers, leaving it an unverified rumor.

It took nearly a month before Alida’s body washed up on the coast within about 100 yards from where she had drowned.  The corpse was entangled in the kelp which kept it from washing ashore for so long. In every mention of her body being recovered, it is also brought out that her body was in an “unusual state of preservation” given the length of time it remained submerged in the sea.

This was not the first story I discovered of a woman drowned off the Pacific Coast where her body washed ashore surprisingly intact and preserved.  I found the same oddity in my research on Agnes Jaycoax’s death as well.  It seems human remains at sea do not decompose at the same rate as human remains on land due to the fact that certain microbes and bacteria that break down the tissue are either not present or not able to reproduce at the same rate.  Also, the temperature of the water plays a part in the rate of decomposition.

Science shows that when a body is floating in water that is less than 70 degrees Fahrenheit, by the third week it turns into what is known as “grave wax,”  or Adipocere, virtually a soapy fatty acid that preserves the body in almost a wax like state.  This may explain why both Alida’s body, and that of Agnes Jaycoax were found in such a state of preservation after having been lost at sea for a period of several days to nearly a month in Alida’s case. 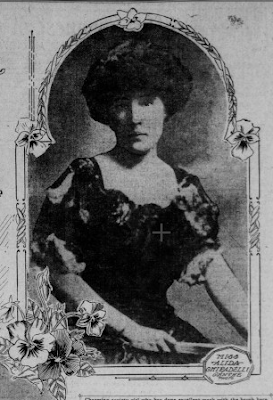 Alida’s well preserved body was brought back to San Francisco and her funeral arrangements were made.  Initially, I assumed she would be at Mountain View Cemetery with her family, or at Cypress Lawn in Colma, where her parents and some of her other siblings are laid to rest but early on I hit a brick wall.  According to funeral records available, I was able to determine that Alida’s funeral did take place in the Chapel at Mountain View Cemetery and she was originally interred in the Ghirardelli family crypt on September 13, 1909.  The cost of the funeral expenses was $618.85, paid by her father.
But researching who is interred at the Ghirardelli crypt today, there was no mention of Alida being there. Thanks to help from Nichelle Sevier who works in the archive vault at Cypress Lawn Cemetery in Colma, California, the mystery was solved. She was able to pull archived records showing that years later the Ghirardelli’s moved Alida, Edwin, Esperanza “Hope” and another member of the family with the initials M. Ghirardelli from Mountain View Cemetery in Oakland, and reintered their remains in the family plot at Cypress Lawn in Colma, California.
What is most intriguing is the fact that Alida’s funeral record states that she was not cremated, but instead interred in a pine casket at Mountain View Cemetery,  yet records Ms. Sevier was kind enough to find and share with me indicate that when Alida’s remains were later moved to Cypress Lawn with her siblings, all were noted as having been cremated.


Alida was not the only Ghirardelli grandchild who met such a dramatic and tragic ending. Edwin Ghirardelli, Alida’s younger brother, committed suicide in 1913, while their cousin Aurelia Mangini died at the Ghirardelli home in 1878. To read more about Alida, Edwin and Aurelia, please pick up a copy of "Stories of the Forgotten: Infamous, Famous & Unremembered," today on Amazon! 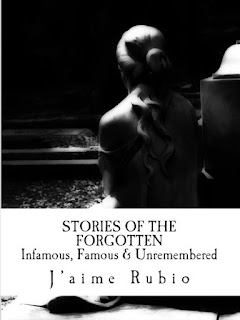