The Mystery at the Maiden's Grave - Amador County History 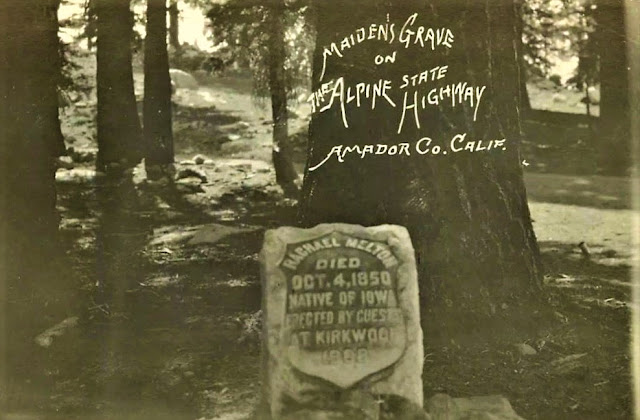 Up Highway 88, just about 30 miles east of the town of Pioneer sits a monument known as the Maiden’s grave. The story behind this marker is quite interesting because it starts way back in 1850, during the time when families coming from the Eastern and Midwestern states were traveling in groups, trekking the dangerous terrain of the Sierra Nevada Mountains in hopes of starting a better life for themselves in California.

On one such trip, a young girl named Rachael fell ill and died as the group was traveling over the Carson Pass area. They stopped and buried the young girl in a wooded area under the base of a large Fir tree, and her mother as grief stricken as she was for having to leave her daughter’s body in the middle of unknown territory, vowed she would return one day to her daughter’s meager burial site.
As the years went on, Rachael’s mother grew older and older, and by the early 1900’s, over 50 years after her daughter’s death, she attempted to find the spot where she buried Rachael so many years before.

Unfortunately, she was unsuccessful in her quest and she returned from whence she came. After word spread in Amador County about the return of Rachael’s mother, various people who had been visiting nearby Kirkwood, just 10 miles to the east, had remembered running across a marked grave nearby in their travels.  The grave was located, and since word spread about this situation, others began remembering that it once was marked with a wooden cross that had the name “Melton” on it along with the date “October 4, 1850.”  Assuming that this grave was Rachael’s these guests from Kirkwood had a small headstone placed for Rachael in 1903.  This would now be known as the “Maiden’s Grave” and it would become the 28th Historical Landmark in California.

Fast forward to 1986, and we learn that a local property owner, Steven Ferrari who lived in the area just about 2 miles from the “Maiden’s Grave” came upon a grave with a rock outline on it while clearing overgrown brush on his land. As it turns out, this is more than likely Rachael’s true resting place. (GPS coordinates: N 38° 38.357 W 120° 08.677) Mr. Ferrari had a plaque erected for this young lady buried in his backyard, and for those who know where it is, this is now known as the “Real Maiden’s Grave.”

So who is buried at the first location you might ask? Well, it took historians several years to research but as it turns out the answers were easier to find than you might think. According to the book “Annals of Iowa” there is a transcribed journal of a man named William Edmondson, and in that very journal he speaks of his journey from Iowa, through the Midwestern states and passing through Native-American territory and finally up the mountains through Colorado, Nevada and into California. When they finally made it to Tragedy Spring they found a wooden epitaph carved on the base of an old Fir tree. Shortly thereafter a member of his group fell ill and passed away, his name was Allen Melton. The date was October 4, 1850. The group buried their friend and continued on their journey finally stopping in Webberville, a now non-existent gold mining town that once was located along the American River just between Diamond Springs and Placerville.