As previously mentioned in PART 1 of this story, (if you haven’t read that part yet, I suggest you click here - Rancheria Massacre (Part1).

By 9 a.m. the next morning there were at least five hundred people present, swarming the town.  Madly enraged and hell bent for justice, they demanded that ALL the Mexicans in the town be strung up and hung. The basic “lynch mob” had set in out of fear and anger. They saw what one group of bandits had done to the townspeople of Rancheria and they were demanding justice.

Judge Curtis made his way to the crowd to “oversee” the proceedings that were about to take place. There were quite a few people in the crowd who wanted the accused to be treated fairly. Even Judge Curtis stated “Let us proceed cautiously; let us be just, let us hang no innocent men.”  Sadly, that would not be the case.

Approximately 35 Mexican men were corralled into a circle with ropes, with the intention of hanging them all. However, some citizens yelled out that the men needed a fair trial. A man by the name of James Johnson (some accounts name him as Robinson)** stepped forward and pointed out one of the men being corralled nearby as being an accessory to the crime.  Johnson, a miner who lived in a cabin nearby, claimed he saw through the crack of his cabin door, the local town drunk known as “Port Wine” (or Puerto Vino) shooting his gun in the street, shouting “Viva Mexico.”

The townspeople thought James was full of it, as many knew Port Wine to be a harmless drunk who would hurt no one. Even Port Wine’s wife begged and pleaded to the crowd along with her husband, hoping that logical thinking or reasoning could prevail here.  Sadly, the majority of the crowd took Johnson’s word for it, and strung Port Wine up until he died. Two other men named Jose and Trancolino were also hanged, based on the testimony of James Johnson by claiming that through the crack of his cabin door he also saw the other two men aiding the Bandits.

A well known citizen of Drytown, William Clark tried to appeal to the crowd, asking for sympathy. Requesting for them to imagine if they were the ones in a foreign land and were being accused of crimes they did not commit. He just didn’t feel that it was right to attack all the people for what a few people had done. The crowd then ganged up on Clark, even considering hanging him after a lady by the name of Mrs. Ketchum stated that Clark was “too friendly” with the foreigners.

Next, a man known as Borquitas was called in to speak with the Mexican people who were being held in the corral. Immediately, upon his translating what the people were telling him, he tried to explain the innocence of these individuals, that’s when more of the town folk started suspecting Borquitas as being a suspect as well. Another man by the name of Sutherland stepped forward and explained that Borquitas was there to help and was not a criminal. Being that the crowd was getting upset again, Sutherland gave Borquitas the “green light” to leave before the crowd got worse again.

It was mentioned that a man by the name of Roberts, then decided to take the law into his own hands and attempted to pull out a gun on Borquitas. Unfortunately, he pulled the trigger prematurely as he was pulling it out and accidentally shot himself in the chest, dying instantly. There were also accounts stating that he was neither mad nor drunk and was actually walking home when the gun went off. There really is no way to know the truth about this instance, except for the fact it left one man mysteriously dead.

**Side Note:  The man known as James Johnson (some accounts name him as James Robinson), whose sole testimony implicated the 3 men who were hanged for allegedly being accessories to the bandits, had ulterior motives as we later find out. In fact, Johnson had a strong interest in Port Wine’s claim. Upon the death of Port Wine, Johnson took over Port Wine’s claim as his own. Interesting isn’t it? Unfortunately, Johnson was lazy and didn’t want to work on the claim so he sold it for $200 and spent the money in less than a week.

On The Trail Of The Bandits 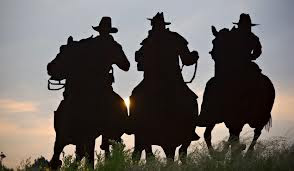 Earlier in the morning the Sheriff came down to the scene of the murders, to view the mutilated bodies. He was so overcome with disgust of what these bandits had done to law abiding citizens of his County, that now only justice was on his mind. And he intended to make sure justice was what he got! Speaking very little as he stepped along the ground, witnessing the gory aftermath of a murderous rampage, Sheriff Phoenix yelled out , “Let’s Go!” as he mounted his horse and motioned for his posse to follow him.

CLICK HERE TO: READ PART 3 OF  THE RANCHERIA MASSACRE