It was September 1, 1934,  a cool autumn day at the Wilton Ranch, just south of Sacramento.  Mr. & Mrs. Henry Paiva, a family of Portuguese field workers living on the ranch with their children, left around 4 p.m. to pick up hops at a nearby ranch. Thinking that they could safely leave their younger children at home with their older sons, the Paiva's left the ranch knowing nothing of the horror they would return to the next day. 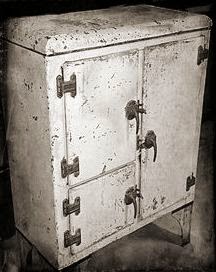 Marina, 7, and Mary, 6, were at home under the watchful eye of their brother Cieverino (or Siverino) along with their brother James, 9, and younger siblings. It is uncertain how many of the older children went with their parents, but the majority of the younger ones were left with Cieverino, 16. By the next day, when some of the older children left to go help their parents on the ranch, Cieverino continued to stay at home watching the younger children.

It wasn't until around 8 p,m. on September 2, that the family made a gruesome discovery. When Adelaide, 18, noticed there were dishes of food from the refrigerator sitting on the edge of the kitchen table and a large chunk of ice left outside the ice box, melting, she decided to see why. When she opened the door, she discovered the mangled bodies of her younger sisters, Mary and Marina.

Within the 12 x 16 inch space someone had shoved the body of Marina and forced the small body of Mary into an even smaller area. Folding their bodies to fit into the box, like rag dolls. Their knees jammed against their heads and blood smeared on the inside of the doors, proving they fought with all their might to free themselves, to no avail.

But who would do such a horrible thing to such young, innocent girls?

The Sheriff's deputies on the scene searched painstakingly for any clues to what happened and who could have committed such a heinous crime. At one point they thought it could have been a hired worker on the farm that may have came into the area and attacked the girls while their parents were away, but questions remained. Where were their older brothers when this took place? Did they not realize what had happened? Did they not notice they were missing?

No one seemed to know anything, and at one point the girls 2 year old brother pointed to the ice box in front of authorities, saying something along the lines of "sissy" which made them wonder if they were accidentally locked in the fridge while playing an innocent game of hide and seek.

According to the Medical Examiner, Dr. C.H. McDonnell who performed the autopsies on the girls, that theory just didn't fit. "The girls died of suffocation, but they were brutally ravished first," the doctor stated. In fact, evidence showed that the girls had been sexually assaulted prior to being locked in the ice box. They were definitely murdered.

It was days after the funeral of the girls, that James came forward and explained that he saw Cieverino lock the girls in the ice box after they made him upset. "Cieverino said he'd put them in the ice box if they didn't behave. They said they didn't care.. [he] put them in the ice box and left them there...we went back to the fields."  Another documented statement from James read, "Cieverino said he was going to kill them, then my biggest sister said don't hurt me and then he closed the door and we went to the hop fields. When we came back they were dead."

Although later on during the trial James repudiated his statement, it was enough to arrest Cieverino and charge him with the murder of his two sisters. Eventually he would confess to the crime, twice. Initially he claimed that he locked the girls in the ice box because they didn't wash the dishes to his liking, and he was teaching them a lesson. He later confessed a second time while in the presence of four witnesses. His written confession read,

"I got the two of them and put them in the ice box and shut the door. The reason that I put them there was because I started to rape them then changed my mind. And I was out of my head. That is the reason I done it. My brother was with me when I done it then we went up the hill with my bicycle and then we went over to the hop fields and that was all. Also while I was doing it my brother kept telling me not to do it."--

When the trial came, Cieverino's attorney, Clinton Johnson went on record for the papers, "We Deny Everything!!"

Previously Cieverino had confessed to the crime, but as I found out after speaking to his daughter, Cieverino claimed he only had confessed because he was "covering" for someone within the family, and since he was a minor it was thought he would not be sent to prison for the crimes. Unfortunately, the jury didn't believe the "not guilty" plea, and it didn't take long after for them to deliberate. They went in at 5:38 p.m., and it only took 3 hours for them to come back with a verdict. At 8:38 pm, they returned from deliberations, finding Cieverino Paiva, guilty on both counts of first degree murder and secondary incest charges.

It was thought that he would be sent up to the Preston School of Industry until he reached 18, before he would be sent up to State Prison, however I found accounts that state he was immediately sent to San Quentin to serve his sentence as inmate # 57514. Although he filed for a new trial after his conviction, his appeals were denied. I have not located the date of his release. Death records indicate that he passed away on January 16, 2005 at the age of 86.

Mary and Marina were buried at Saint Mary's Catholic Cemetery in Sacramento shortly after their deaths.

Note: Cieverino's children believe that he was completely innocent of the crimes, and that he had taken the rap for another older family member, and I feel it is only right to mention that.