History of the Argonaut and Kennedy Mines - Amador County 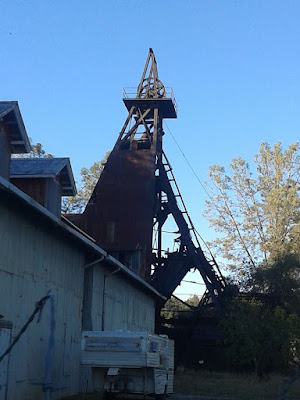 While traveling down historic highway 49 through Jackson you cannot miss the rusty remnants of the old Kennedy mine off in the distance. It is also impossible to ignore the towering shell of what is left of the Argonaut mine on the side of the hill as you drive down into Jackson as well.  Both mines share some pretty interesting and also tragic history. Here is just some of the history I have dug up over the years about these two amazing historic landmarks in Amador County. Enjoy!

The Argonaut Mine, which was originally known as the Pioneer Mine, was discovered around 1850, by James Hager and William Tudor, who according to the 1860 Census show were freed slaves living among the Chinese in Township 1, Amador County.  At some point around 1857, the property was acquired by George Stasal, Frank Hoffman, Peter Laubersima, William Slaughter, Charles Weller, Otto Walter and Louis Mentzlen to form the Pioneer Mining Company. It would later become The Argonaut Mining Company in 1893.

December 1st, 1921--- According to the Sacramento Union newspaper, at approximately 1:30 a.m. the Argonaut Mining Company was robbed after bandits overpowered the two night watchmen, James Podesto and Reese Williams, blew the company safe and escaped with nearly $100,000 ($50,000 of which was in gold). The robbers wore red bandana hankerchiefs over their faces and carried pistols and shot guns.

“The mill safe then was wheeled to the convenient point and the bandits leisurely drilled a hole in the door, filled it with nitro-glycerin and blew it open. After removing all the gold inside they escaped in a waiting automobile…..Upon investigation it was found that the bandits had cut the telephone lines leading directly into the mill….The wheel tracks of a large car were plainly visible in the road to Ione, 12 miles distant. Rain began falling early, however, and when the posse reached that point it was forced to turn back.  Sheriff Lucot stated the robbery evidently had been planned by someone familiar with the methods employed by the company.”

It was believed that it was an inside job, and involved possibly eight men who worked at or were familiar with the mine. Two men were eventually arrested and at least one of men, Hiram Baker, was acquitted of the crime.  At that point Argonaut Consolidated Mining Company was owned by John T. Smith of New York, who was President, along with co-owners  E. A. Stent of S.F. and John Raggio of Stockton.

On August 27, 1922, the worst mine disaster in California history took place, when a toxic mix of gas and fumes caused a fatal fire 4,650 feet deep, trapping the miners below. There had been rumors that the fire could have been started by arson, from a rival employee at the Kennedy Mine, but there has never been any proof to substantiate the claim.  The fire lasted for 2 days, and rescue efforts lasted for weeks. All but one of the miner’s bodies were recovered and they were buried at the Jackson Cemetery. The 47th miner was not found until over a year later, when the mine shaft was being flushed out, the remains were accidentally discovered. It was the body of the man who wrote the message on the wall “3 o’clock, gas getting strong, Fessel.” The man was Edward William Fessel, and he was finally buried next to the other fallen miners. The fatalities of this disaster were Amador County residents, of Italian, Serbian and Spanish ancestry.

It was surveying work done years prior by Kennedy Mining Engineer, Walter Ephraim Downs that directed the rescuers to dig through to the Argonaut mine shaft in an attempt to rescue the trapped miners in 1922.  Although the effort was futile, his work gained national attention for giving the rescuers a fighting chance to reach the Argonaut shafts.  On another note,  Mr. Downs was the son of Robert Carleton Downs’ the superintendent of the Union Mine (later Lincoln Mine) in Sutter Creek and owner of the Hanford & Down’s stores which were located in Sutter Creek, Jackson and Volcano.  Walter Ephraim Downs’ brother, Fred, was the one who tragically drowned in the Preston Reservoir in Ione, in 1902.

The widow of miner Charles Fitzgerald, attempted to take her own life on September 18, 1922, when she swallowed poison.  Amador County Physician, Edwin Eugene Endicott came to her aid and successfully saved her life.

Another Tragic Death – “The ill-fated Argonaut Mine, scene in 1922 of the disaster in which 47 men were killed, today claimed the life of another. Claude Smith, 22, was instantly killed when a dynamite cap he had set blew up prematurely because of a defective fuse. A companion, Harvey Jones, was badly injured.” – Healdsburg Tribune, March 17, 1930. 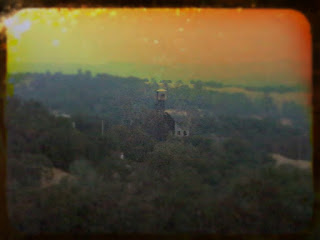 According to Amador County history, the Kennedy Mine started in January of 1860, when Andrew Kennedy filed a mining claim along with four other men who were associated with the Oneida mine, to the north. Kennedy had dug a prospecting shaft approximately 100 feet deep, using a bucket attached to a winch. Within a year or so, Kennedy sold his interest in the mine for $5,000, due to the fact it wasn’t doing very well.  By 1869, the mine was sold to eleven businessman from Jackson in the amount of one dollar. The men formed the Kennedy Mining Company.

“So named from its discoverer was developed by John Fullen, James Fleming and James Bergon, working the rock at the Oneida Mine. In 1871, it was taken by a joint-stock company, the Richlings being large owners. The mine has hardly been a success, and in 1880 it was closed down. The vein is close to the foot-wall and has pitched rapidly to the east, following a pitch of nearly forty-five degrees, which is considered very flat. It is believed that it will eventually join a vein about six hundred feet to the east, called the “volunteer.” The lode does not follow the rift of the slate and consequently is not a true fissure vein.” – Page 149 “History of Amador County” by Jesse Mason

The mine was sold in 1886, for $97,500 to bay area investors, and the company changed its name to “Kennedy Mining and Milling Company.” The mine operated until 1942, when all mines were closed by the U.S. Government to support the war effort. At that time, the Kennedy Mine was listed as the deepest gold mine in all of North America, with a vertical distance measured at 5,912 feet, and 50 miles of underground excavations. In 1961, Sybil Arata purchased the property to live out her retirement. She resided in the Manager’s Residence “Bunkhouse” for the rest of her life.  Her final wishes for her property were to keep the area open for wildlife to roam, and for the mine to be preserved for historical posterity.

An interesting tidbit -- In 1904, an escaped ward, Dan Gillette, from the Preston School of Industry made his way up to the Kennedy Mine property and tried to fit in with the employees there at the new boarding house. He managed to get himself a free meal and hide out for a while, and just as he was going to head down into the mine along with the other miners, Constable Kelly from Ione, who was hot on his trail, arrested him.

Deaths at the Kennedy Mine

Obviously this is not a list of every man who died at the Kennedy Mine, but here is a list of the few stories I have been able to dig out of the archived newspapers of the time period.

On March 15, 1902, miner David De Ricci made a misstep, falling backward down into the east shaft 2,600 feet. “In his descent, his arms, legs, the back portion of his head and every vestige of clothes were torn from his body.”—

May 26, 1902 -- "A miner named Francisco Giovanoni [SIC] lost his life at the Kennedy Mine shortly after midnight on the night of May 26. The fatality was purely accidental. It occurred at the 2300 foot level of the north shaft. There were from fifteen to twenty men around there at the time. A plank 18 inches wide was in position for the men to walk to and from the shaft, and below this was a chasm thirty feet deep, made by the excavation of ore. Deceased was in the act of carrying the lunch bucket to the station when he was seen to make the fatal step off the planking, and fell to the bottom of the chute.”—Amador Ledger, May 30, 1902.

June 12, 1902 - 30 year old Walter Williams was instantly killed when about 200 feet from the top of the shaft, his body came in contact with a shaft timber. He was caught on it and dragged out of the skip. His head and body were crushed between the skip and timbers. His companions C. Parker and B. Allison could not explain how the accident happened because the shaft was so dark. Williams had only worked at the mine three weeks and was new to the area. No one knew where he came from and he had no family to contact. All that was known was that he was a member of the Knights of the Pythias and was living with Henry Osborne at Kennedy Flat.

March 6, 1905 – Edward Hallam was killed at the Kennedy Mine today. He was descending a shaft from the 2400 foot level when a skip came down in another compartment. It is believed he got scared and let go his hold. He fell, breaking his neck.” – Los Angeles Herald, March 7, 1905

December 7, 1909, Italian immigrant Luigi Reviera was crushed to death by several tons of rock falling on him while working at the 3,150 level of the mine with Fred Hicks. Engaged in placing a butt cap in the hanging wall above the tunnel timbers, the rocks gave way and a huge slab came down on him, killing him instantly.

February 27, 1911- James Baldwin was crushed to death while working at the 3400 level of the mine.  Baldwin and his co-workers were told to be careful working in the area that had been blasted earlier. While cleaning out the loose dirt a large mass of rock fell from above, crushing him.  Baldwin’s helper claimed he could hear Baldwin hollering that he was stuck, but given the massive amount of rock and dirt that covered him, the coroner felt death was almost instantaneous.

November 17, 1913 – Miners, Maksim Rupar and Jako Acimovich died from a premature explosion while in the mine shaft.

On December 20, 1915, the timber boss William Harvey and A. Targo both met their death when they fell down the main shaft of the mine, a total of 3,900 feet.  According to the newspaper accounts, Harvey had been working in compartment 37 since 8 o’clock in the morning. As he was descending a ladder at the entrance of the shaft he became dizzy and slipped, falling. As his body was going down the shaft, just below was A. Targo, who was standing on the edge of the shaft. Harvey’s body smacked Targo’s knocking him off the edge and down the shaft with Harvey. Both died and their bodies were “badly mangled.”

June 12, 1916 - Mike Vijovich also died after falling 300 feet down a shaft. After straightening a mine can that had fallen on its side, he lost his footing and slipped.

You can find some of the men mentioned above in the Jackson City Cemetery, St. Sava Serbian Orthodox Cemetery or the Catholic Cemetery in Jackson.