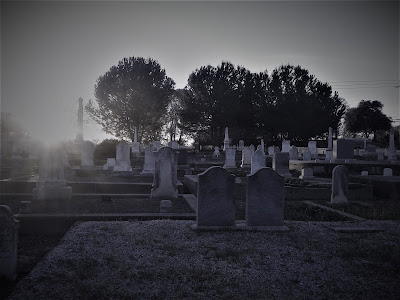 During my line of work I have uncovered some really tragic stories of murder, accidental deaths, suicides and unsolved mysteries. But despite the fact that most of the stories I cover veer towards unexpected or untimely deaths, I have always believed that everyone's story deserves to be remembered. Whether a life was cut short by a dramatic ending or one's life was as happy and trouble-free as possible every life is worth remembering, good or bad, tragic or epic. It is with that thought that I am pleased to give you a short but hopefully enduring account of a man named "Nat." No, he didn't make a huge dent in history, and no, he didn't build bridges, skyscrapers, solve crime or invent the automobile. But he did live his life to the fullest and he had one heck of a "western" life in California's historic past.

I had been contacted by a dear friend of mine, Jeadene Solberg who had been drawn to Nat's story for many years. I researched his life the best I could and created his Find-a-Grave memorial for him, but I felt that he needed more than that. As a gift to my friend Jeadene, this is my tribute to Nathaniel Cecil for everyone to remember him by.

Nathaniel Cecil was born somewhere between 1835-1838 in Missouri (despite what his grave marker states). When he passed away the townsfolk were never completely sure of his birth year, but by way of Census records that became available so many decades later, we can create a more accurate timeline of his life.

When Nat was born, he was born a slave. And being so, he was considered the property of  S.G. Cecil, who brought him with his family from Missouri. S.G. Cecil also lived in Ione with his wife and seven children on their own farm. Census records indicate that Nat had to have been freed by S.G. Cecil sometime after arriving in California in 1857, because by 1860, he is no longer living or working for Cecil. As you will read later on, his obituary mentions that Nat worked to pay for his freedom at the cost of $1,500.00, and how he did that was through his next employer, Mr. Martin.

By the 1860 Census, Nat is listed as working for James P. Martin in Ione on Martin's farm.
Nat was not the only "laborer" listed working and living on Martin's farm, but he is the only African-American laborer listed. In total there were six men listed: James Surface, Vol Richter, William Richter, Isaac Bunton, William Swearegan and Nat Cecil.

I believe that at some point Nat stopped working on Martin's farm and eventually was offered the job working for Smith & Martin in their lumber camps (as also mentioned in his obit, however I think the newspaper mixed up the order of employment). Perhaps James Martin was the "Martin" in Smith & Martin, or maybe a relative. The Amador County Directories listed an A.C. Martin working as a Lumber Merchant during the 1870s-1880s.

By the 1870 Census, Nat is no longer in Ione, but now he is in Township 3.  According to Amador County Maps, Township 3 spanned from just west of Pine Grove and Volcano, to all the way east past Buckhorn, and as far north as Shakeridge areas. Here it appears that Nat was bunking with twelve other working men, possibly at a boarding house. Nat is listed as 28 years old at the time, and working as a "Teamster."

His "boarding buddies" or possible co-workers were listed as:
Jules Ferret, 56 – France  (Lumberman)

By 1880, Nat is back in Ione (Township 2) working as a "hearder" for Frank Frates' farm.
He is one of thirteen laborers listed which included: 8 Caucasians, 4 Chinese, and 1 African American. Finally, the 1900 Census is the first time that 63 year old Nat is listed as the head of his own household, however he was living in the same dwelling as the Rice family (John, Martha and John,Jr.). Perhaps he was renting a room from them, or on their property, but the census marked that he was living in the same dwelling as the Rice's. The coolest part of this census is that Nat is listed as a "Vaquero." A vaquero was considered a cattle-driver or cowboy.

On January 25, 1907, Nathaniel Cecil passed away. His friends buried him in a small grave at the Ione Public Cemetery. A man who was born a slave, traveled across the country, was given the opportunity to earn his freedom and worked in the days of California's old west, he certainly led an exciting and interesting life. A life worth remembering.

"Passing of a Colored Landmark"-- 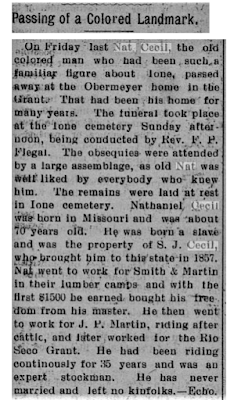 "On Friday last Nat. Cecil, the old colored man who had been such a familiar figure about lone, passed away at the Obermeyer home in the Grant. That had been his home for many years. The funeral took place at the lone cemetery Sunday afternoon, being conducted by Rev. F. P. Flegal. The obsequies were attended by a large assemblage, as old Nat was well liked by everybody who knew him. The remains were laid at rest in lone cemetery. Nathaniel Cecil was- born in Missouri and was about 70' years old. He was born a slave and was the property of S. J. Cecil, who- brought him to this state in 1857. Nat went to work for Smith & Martin in their lumber camps and with the first $1500 he earned, bought his freedom from his master. He then went to work tor J. P. Martin, riding after cattle, and later worked for the Rio Seco Grant. He had been riding continuously for 35 years and was an expert stockman. He has never married and left no kinfolks."—Amador Ledger, Feb 1, 1907