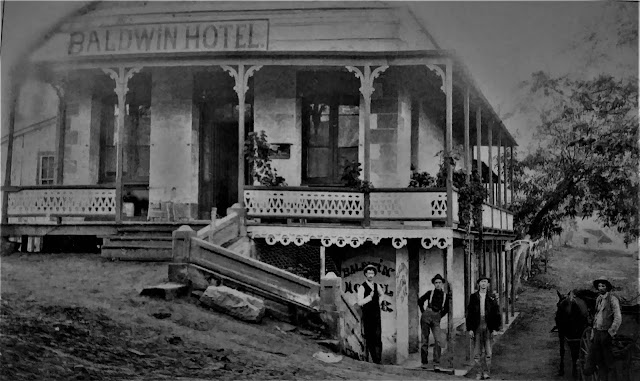 This is my second blog featuring Mokelumne Hill's history. My first blog on this subject matter was focused on the history of the Hotel Leger, including the possible origins to its ghost stories. I also took the time to debunk some common myths that had been spread as "fact" for too long regarding that hotel.

Needless to say, I love Mokelumne Hill, and I want to share with you the little hidden treasures in it's history. So today, my next topic will be on the history of the Baldwin Hotel.

The structure located at 8353 W. Center Street (corner of Center and Clark) was first built back in 1854, by John Rapetto and his partner John Rogers. Since then it has housed several businesses including Raggio's Stone House up until around 1876, the Baldwin Hotel originally operated by Louis Baldwin, and the Gardella Mortuary, which was located in the basement of the building.

When Charles Gardella purchased the property, taking over the Baldwin Hotel, he used his skills as a carpenter to make several additions to the structure, including the veranda and the gable-end gingerbread woodwork which was very popular in Victorian design at the time.

Charles Gardella immigrated from Italy to the United States in 1861. He eventually settled in Mokelumne Hill, and Calaveras County Marriage Records note that he married Lenora Catalde on November 11, 1875. The 1880 Census has him living in Moke Hill, and working as a wagon maker. By the 1900 Census, he is listed as a Carpenter, with his wife and eight children (half of whom were adults) living with him.

It was on March 25, 1903 when a strange incident occurred at the Baldwin Hotel.

"James W. Porteous, 25 years old, foreman at the What Cheer Mine, shot himself in his room at the Baldwin Hotel early this morning and died almost instantly. Porteus had been drinking and gambling during Tuesday night and when he returned to the room he told his wife he wanted to shoot out the electric light. She told him if he must shoot to go outside. He said he would. He then stepped in the hallway and shot himself."-- San Francisco Call, 3/25/1903 & L.A. Herald, 3/25/1903

The original headlines in the newspapers were: "Kills Himself While Intoxicated," and "Went Outside And Shot Himself."

Later on this was reported in the local papers as a form of redaction for their earlier posts.

"The Shooting Was Accidental; James Porteous Was Not A Suicide.--
The Coroner's jury finds a verdict accidental death on testimony of principal witnesses. At the time of writing the account of the death of James. W. Porteus, last week, who shot himself at Mokelumne Hill on the morning of the 25th, we gave the commonly accepted report that it was a case of suicide. The testimony brought out at the inquest, however, seemed to give another aspect to the affair & the jury returned the verdict of accidental death.

Given the fact that Porteous was very intoxicated when he stepped out of his room with the intent to shoot something, it is very likely he did shoot himself on accident, fatally injuring himself.  Accident or suicide, the death was odd either way.

I could find no other reports of deaths in this building, although it is very possible given the age of the structure and the amount of people who have owned or lived in it over the years, that there have been others who have passed on while inside. It doesn't necessarily mean those deaths were suspicious though, just that since people do grow old and die, or get sick and die, it is logical to conclude that James Porteous' death was more than likely not the first or the last one to occur on the property.

In 1909, Charles Gardella's wife, Lenora divorced Gardella and took the younger children with her. She remarried, but their older sons stayed near their father. John Gardella (1888-1956), Charles' son, eventually opened the Gardella Mortuary in the downstairs portion of the house in the basement. He was the County Coroner and a mortician for over 48 years.

(Please remember this house is a PRIVATE RESIDENCE now, so please do not disturb the current owners/residents).

Well, I hope you enjoyed this short but concise history of the Baldwin Hotel.