The Many Lives of Fanny Sweet (Part Four) 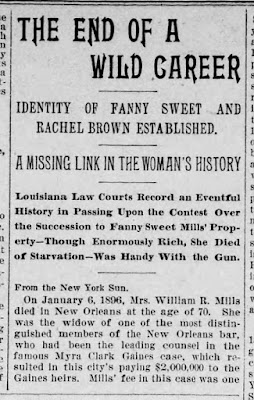 By now we have reached the 1860's.  Between 1860 and 1880, Fanny basically flew under the radar. Other than the slanderous newspaper articles written about her in 1862, and her novel of a response to those newspaper articles, there really isn't much in the way of documentation showing what she was up to during that time period.

By 1880, fifty-four year old Fanny (who listed herself as being forty-five) pops up in the census in New Orleans, but now she is working as a domestic for William R. Mills. The census recorder misspelled her name was Fannie Seyman, thus the reason it was hard to locate. At some point during her employment to Mr. Mills, Fanny must have won his heart, or he won hers. Either way, the two were married and it appears the pair were actually happy with the union.

Mills was a prominent attorney in New Orleans and his last client, Myra Clark Gaines retained him to represent her in her infamous lawsuit (originally known as the longest running lawsuit in the history of the United States) which proved to be the biggest payoff in Mill's life. Sadly, he never got a chance to truly enjoy the wealth he received from that one case, and so on July 17, 1891, William R. Mills passed away, leaving all his fortune to his "beloved wife."

Between 1891 and 1893, Fanny continued to live in excess but developed permanent blindness by 1893, and her paranoia became even more severe. By this time she was worried that everyone wanted money from her, and that if she had anyone living with her that they would rob her. Because of this fear of everyone possibly wanting to rob her, she became a hermit in her own home, refusing to allow outsiders to come inside to help her. She would occasionally send for a doctor, an attorney or notary, especially when it came to her wills. Prior to her death she had written up several wills but revoked them all just before her death. The last will was to leave many friends and attorneys her estate, as well as a large portion going to an orphanage (which I believe might have been where William G. Stephen's children might have ended up at).

Another interesting tidbit of her revoked will was a clause for anyone she had listed to inherit money from her. Her demand was that they must all attend her funeral and visit her grave regularly, also visiting every All Saint's Day or their inheritance would be stopped and the money given to St. Joseph's Church instead.

With all the money she had at her disposal: $45,000 of US Government Bonds, over $60,000 in real estate, and much more including a $450 check found under her pillow, Fanny refused to have anyone help her or purchase food for her. Towards the end she fell ill and being all alone and too weak to send for help, she fell to the floor of her room and remained there, virtually starving to death. Eventually a neighbor of hers worried about her and decided to go inside the house, where she discovered her emaciated body, rotting away.

It was a very sad end for Fanny....but, was it really the end?

Well, as far as her life was concerned, yes, she was dead, but her story was far from over.

Given the highly publicized account of her sudden death and her past 'infamy' with the newspapers years prior, the media had a field day with Fanny's story once again rehashing the past, all without her able to defend herself this time.

Since Fanny had passed away and her wills had been previously revoked, she died intestate. This gave the State of Louisiana the green light to try to lay claim on her property, but they didn't expect people to come out of the woodwork claiming to be heirs of hers.

There were people from all over the country trying to claim they were related to Fanny, but it was Charles Clinton Brown and niece Rosanna McVey Fuller who helped solve the biggest mystery of all: Who was Fanny Mills (Fanny Sweet, Fanny Hinkley, Fanny Smith, etc)?

It took two years of litigation to sort this mess out. From witness statements, investigating long lost letters and documents and even cross-examining witnesses who committed perjury in court, this case certainly gained attention from the press. During one part of the court battle, J.F. Moliere and J.A. Peale testified, claiming they met Fanny on her crossing over from England to the US on the ship Waterloo, trying to contradict the story that C.C. Brown had given to court. When the ship's passenger list was obtained, neither Fanny nor Moliere or Peale were listed on it. Needless to say their testimony was thrown out. 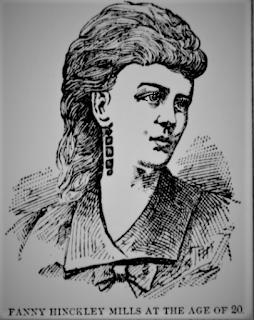 After C.C. Brown testified and established his professional background, and that his character was untarnished, he went on to prove beyond a shadow of a doubt that Fanny was in fact Rachel Brown of Ohio, and that she was his elder sister. His testimony as well as his niece's sealed the fate of Fanny's estate. (Read C.C. Brown's Interview here)

The icing on the cake was the smoking gun evidence Rosanna McVey Fuller brought to court, one daguerreotype photo of Fanny and a pair of earrings she actually produced to the court. The photo showed Fanny wearing the same exact earrings. The question then was how did Rosanna acquire them? She testified that her aunt Fanny had given them to her. Judge Fred D. King closed the case and ruled in favor of C.C. Brown and Rosanna McVey Fuller. In all Fanny's estate was estimated to be worth around $100,000.  (Read Brown Wins His Suit here)

Over the years Fanny's story has been slandered terribly. Yes, she lied about her background from the very beginning, but you have to ask yourself, why? Was she lying to hide her past because of embarrassment? Did she wish to forget her reality and instead chose to create this fantasy in which she was the star? Regardless of why she started to lie about her past and strove so hard to conceal her true identity, many of the rumors or flat out accusations made against her were simply unfounded. Again, just because she lied about some things doesn't mean everything she said was a lie.

And if people wish to believe all the horrible things spread about her, why do they choose to forget the good that was documented about her? What about the thousands of dollars that was said to have been donated by Fanny during the Civil War to help the injured and sick on the battlefields? What about the monies she gave to people in New Orleans who reached out to her in times of crisis, needing some financial help. She was adamant that she never turned a person away no matter what.

For the record, we will never know in exact detail all the truths about Fanny's life. We have what the newspapers liked to sensationalize about her and then what she wrote about herself.  As I wrote in the first part of this story, "there are always two sides to every story," and I feel we owe it to Fanny to at least give her that platform here to share her side of the story and allow us to come to our own conclusions after reading it.

Rachel Brown, aka Fanny Hinkley-Mills was laid to rest at the St. Louis Cemetery # 3 in New Orleans in January of 1896, at the age of 70. Whether you believe Fanny's personal account or the elaborate and scandalous rumors spread about her by the newspapers of the time, Fanny deserves our respect in death that was not afforded to her in life.

In ending, I felt the best words would be Fanny's own words from the ending of her auto-biographical response to the slanderous accusations made against her back in 1862. I felt her own words were not only fitting but also give us a chance to let Fanny finally speak once and for all on her own behalf.

"And now she has nothing to add to this already lengthy card, unless that it is from no desire to obtain further notoriety, that she has published it. But falsehoods had been circulated of such skillful framing and circumstantial account, that she was forced, in justice to herself, to expose them in all the  nakedness of their monstrosity. Having done so in a manner, as she believes, to satisfy the  most prejudiced critic, she prays from the public only peace and quiet, and freedom from molestation.

For the wrong that has been done to her, either from malice or thoughtfulness, she forgives, if she cannot forget; and she will pray that those who wronged her may be forgiven by a power on high for all the anguish they have unjustly caused her, as well as for the shame they have heaped upon the dead, who cannot answer them, and upon the little orphans who may yet, in after years, be doomed to a bitter knowledge of all that was spoken concerning their parent.

One day all mortals have to stand before the bar of the Almighty Judge, and the sins of their earthly career will be exposed as they are, without worldly position or influence to screen them, and without malice to exaggerate. Until that dread day, the writer hopes not to be dragged before the public in a false light, and to have to repel charges for which she may seek in vain for a foundation. And such is the fervent prayer of FANNY MARIA HINKLEY. ---" Southwestern (1/8/1862)