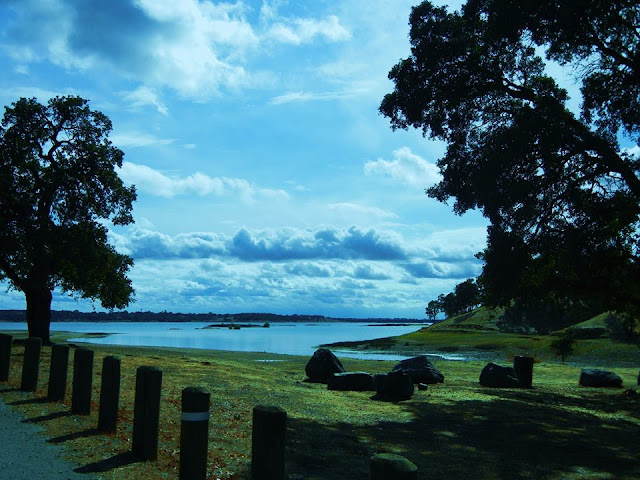 "From first glance at the beautiful shore of Lake Camanche, located on the borders of Amador and in Calaveras Counties, you would never guess that at one time a town stood in its place. In fact, there were other settlements such as Lancha Plana, Poverty Bar, and Limerick, which was later renamed Camanche, before the man made reservoir was completed in 1963.

Said to have been one of the biggest ranches in the area, the Hill Ranch spanned between 500 to 1,000 acres, and was run by a woman by the name of Euphemia Hill.  Widowed at the age of 31,  Euphemia picked up where her husband left off and carried on managing the ranch, all the while raising three minor children on her own.  The story of how she became a widow is an interesting and complicated one to say the least.

According to historical accounts passed down through the years, Euphemia’s husband, Hugh L.W. Hill, who went by his middle name, “Lawson,” suspected Euphemia of cheating on him with Marion Tate.  At the time, Marion was working and living at the Hill Ranch. The 1860 Census showed 35 year old Tate as one of the members of the Hill household, with his occupation listed as “farm laborer.”

Apparently Euphemia was not happy with her marriage to Lawson so she filed for a divorce on May 12, 1861, the very same day he died.  Although it was said to have been a neighbor who took Euphemia to the courthouse to petition for divorce, Lawson was adamant that it was Tate who influenced her to leave.  In a drunken stupor, an armed Lawson Hill confronted Tate and a shootout ensued.  After the dust cleared, Lawson was dead and Marion Tate was the last man standing.

The Society for the Preservation of West Calaveras History’s website index sources note that Marion Tate was acquitted of the murder of Lawson Hill on May 13, 1861, so it appears that his actions were accepted as  self-defense. Unfortunately, one Hill family descendant would disagree with the story entirely. According to an article from the Stockton Record, kindly provided to me by Danielle Ballard at the Calaveras Historical Society, there’s been some misconceptions about Hill’s death down through the years.

Pleasant Hill III, the great nephew of Euphemia and Lawson Hill, was interviewed for the newspaper many years ago claiming that Lawson was murdered by Tate and that the inquest showed that Tate approached Lawson when the incident occurred. He was adamant that the newspapers had made Lawson look like the bad guy, when really he was the victim in the story.  Pleasant Hill also mentioned that Lawson’s murder occurred right when he was just starting a hog ranch on his property. He was only 35 years old and still in the prime of life.


It was believed that Lawson was buried at the small and forgotten Pioneer Cemetery  on the south side of Highway 12, about two miles east of San Andreas because his headstone can be found there. With time and the elements breaking it down, his headstone is battered and broken and now lays flat up against the hill and centered in a newer concrete foundation, no doubt to keep the stone from sliding down. 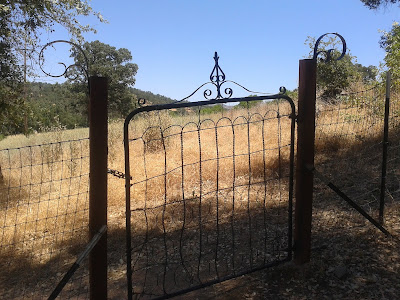 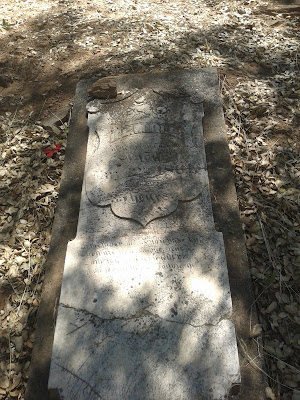 Although Lawson’s chapter in life was over, that was not the case for his former wife, Euphemia. By the mid 1870s, Euphemia had lost two of her sons. In 1874, Jesse passed away at the age of 25 years, while John died one year later at the age of 19.  Both young men were originally buried at the Dorsey-Holman-Ostermann Cemetery in Camanche.  As time went on, Euphemia kept busy, entering into a contract with businessman Giovanni N. Milco of Stockton in the 1870s. Cultivation of a natural insecticide made from dried Chrysanthemum (Pyrethrum) flowers began on her ranch. It was then marketed as “Milco’s Buhach, Universal Insect Exterminator.”

In 1910, Euphemia Hill passed away at the age of 81 years. She was laid to rest on the Hill Ranch in a private cemetery. Her last remaining son, Irving died in 1932, and he also was buried beside his mother in the family cemetery. By the early 1960s, when Camanche was deserted and plans to fill the area in with water to create a reservoir had started, the Hill family was exhumed from their original burial spots and reinterred at the historic Lodi Memorial Cemetery in Lodi, California.  What once was the Hill Ranch now lies at the bottom of Lake Camanche, forgotten and buried in a watery grave.

An interesting point I would like to share is that there is also a newer, separate marker at the Lodi Memorial Cemetery for Lawson Hill with his same birth year and death year, right next to Euphemia’s marker. I spoke with Isabel at the Lodi Memorial Cemetery who pulled the old archived records and the mystery deepened. Their notes state date of death as being January 1, 1861, and burial on October 25, 1861, which we know to be incorrect dates. She said there was no official record of him being buried at the cemetery.

It would have been impossible for Lawson to have been buried in that section at the Lodi Cemetery at the time of his death.  The section where these plots are located is not part of the old historic section, so there would not have been anyone buried there at that time in 1861. Even the marker itself is newer, and had to have been added around the same time Euphemia and her sons were reinterred there in the 1960s, as the cemetery staff stated.  Lawson Hill’s original grave, where I believe he is still buried, still rests on the steep hill at the Pioneer Cemetery off Highway 12.  He is literally a man with two graves.

Fast forward to recent times, I was contacted by a Hill relative, Jimmy King, who was searching for Euphemia and Lawson's graves. After his own family research he discovered that Lawson actually is buried at the Lodi Memorial Cemetery after all. You see, according to Shannon Van Zandt at the San Andreas archives, Lawson was originally buried at Poverty Bar's cemetery, but around the time that the reservoir was being planned, his grave was dug up. The odd thing though was that his body went to Lodi to be buried, while his headstone went to the Pioneer Cemetery near San Andreas.  Since the Lodi Memorial Cemetery could not give me a definitive answer about one of their own burials, when I published my book in 2016, I was still unsure where Lawson was buried, so I left it up for debate. Now, once and for all we know Lawson is buried in Lodi, and has been there since the 1960's.

In the recent years, the Calaveras Enterprise mentioned that the old television series, “The Big Valley,” which first aired in 1965, starring actress Barbara Stanwyck, was based on Euphemia and the Hill Ranch at Camanche.  The article forwarded to me from Danielle Ballard at the Calaveras Historical Society  also mentions this story reiterated by Pleasant Hill during his interview for the Stockton Record years before.

If you are ever in the small vineyard town of Lodi, California, please stop by the Historic Lodi Cemetery and pay your respects to Mrs. Hill, a true female pioneer of California’s old west. And please don’t forget stop by the grave of Lawson Hill, too, which ever one of the two that you choose to visit."----  From the book, "Stories of the Forgotten: Infamous, Famous & Unremembered." (Chapter 11) - By J'aime Rubio, Copyright 2016, All Rights Reserved. (ISBN-13: 978-1523981175) 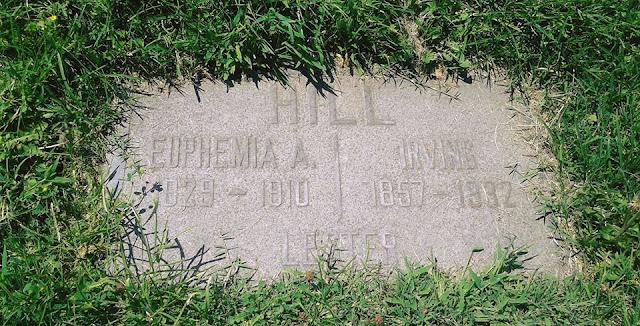 To read more stories like this one, purchase your copy of "Stories of the Forgotten" on Amazon today!