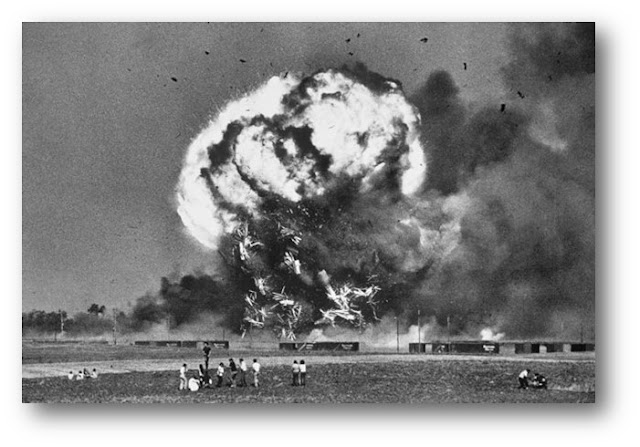 It was the morning of April 28, 1973, when Phoebe Astill was violently awakened from her sleep, having been thrown literally out of bed by a terrible concussion that rocked her house.

"At first I thought it was a plane that had crashed,”  the lifelong Roseville resident remembered. “I thought it may have been one of the planes headed for McClellan, but it turned out that wasn’t it.”

In fact, that explosion would be the first of many that would wreak havoc on the Southern Pacific Rail Yard and adjoining areas for the next 32 hours, and leave a terrifying mark on their memories that would last a lifetime. “It was a hot wheel that caused it,”  explained Locomotive Engineer David Epling, who is familiar with the historic catastrophe. “As the train made its way down the pass the wheel overheated, building friction.”

The wheel overheating led to sparks and initially set the oak floors of the railcar on fire. Once one those first flames started, they led to the additional cars catching ablaze. That is when the 7,000 MK-81 bombs that the Naval Ammunition train was transporting en route to the port in Concord, and headed for Vietnam, became dangerously hot and started the chain reaction explosions. “These were thousands of 250 lb. bombs, very destructive,” Epling added.

The bombs were armed with 90 lbs. of explosive, and were said to be lacking the two fuses necessary to detonate. However, they did ignite — in a massive disaster that destroyed the rail yard, leaving it riddled with craters. The explosions started out sporadically but then became more frequent and powerful. The more significant blasts shot debris hundreds of feet into the air and lasted for nearly five hours.

Throughout the day, thousands of explosions continued to rock the area, some large, some small — all very destructive. A number of train and rail yard workers were thrown in upwards of 100 feet or more.  Confusion and panic began to set in. People were hurrying to find cover. Others were wondering if it really was an accident.

The State Capitol building, nearly 17 miles away, was not immune to the sounds of the blasts either. Worrying of the possible damage and danger to visitors, the State Police Captain gave orders to close the Capitol for their weekend tours. Countless buildings, homes and businesses were damaged or destroyed from Roseville to Citrus Heights. The community of Antelope was completely leveled as well as the Citrus Heights Firehouse. There were fences blown down from the blasts, fiery shrapnel flying and landing everywhere as well as other heavy debris scattered for miles. The blasts blew out nearly every plate glass window along downtown Roseville streets.

Hundreds of people were injured though no one died. When asked about some of the things she remembered that day, Astill recalled, “I remember the explosions were so powerful that my mother’s ‘57 Chevy Station Wagon was lifted from one lane into the next, on the road heading back to Roseville.” Astill also remembered that — out of all the injuries — the one that just with her was a young girl who had lost an eye.

“It was a miracle that no one died,” the museum curator said.

When the smoke cleared and the skies returned to its powder blue color, there were many questions left unanswered. After this accident, it became a requirement that all railcar wheels have non-sparking brake shoes and spark shields installed. The circumstances surrounding the magnitude of the event also led to Congress passing the Transportation Safety Act, which implemented numerous regulations and safety protocol from various agencies into one publication, specifically placing responsibility and accountability on all parties involved in transporting hazardous materials.

Many years later, after Union Pacific took over the rail yard, more bombs were unearthed from the ground during their remodeling project. One of the remaining bombs that had not exploded in the disaster is now on display in the city’s Carnegie Museum, by way of the Roseville Historical Society’s exhibit, “Roseville, A War Zone.” The exhibit will remain on display until the end of May (2014) and features newspaper accounts, photos and other memorabilia from the disaster.

(Originally published on May 29, 2014 in the Roseville Press Tribune, written by J'aime Rubio. Photo: Archival Photo)

Publisher/Editor's Notes: This is one of a series of articles that I wrote for the Roseville Press-Tribune/Placer Herald several years back when I used to write the historical articles for them.  According to my old editor, since I wrote the content I can repost the articles. I have also obtained permission by Gold Country Media a few years back to republish my stories, too.