The Story of Nellie Hill and her Two Graves

I have been  meaning to write about Nellie Hill for about 8 years now. It seemed that every time I began to plan to sit down and write her story, something happened in life that distracted me, or I had other responsibilities (such as finishing my latest book) that took precedent. Since we are all stuck at home during this health crisis that will certainly go down in history, I am here today, penning this blog just for you, my readers to finally learn about the story of Nellie Hill and her two graves! 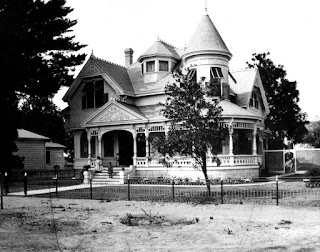 To begin, I  must start with the story of George Washington Hill and Mary Hill of Lodi.  George was born in Brownfield Center, Maine on September 28 of 1846, (According to his death certificate he was born Sept 20, 1845), who came to California in 1869. He married Mary Lewis (daughter of Mary Jane Johnson and Philander Lewis of Ann Arbor, Michigan). The two settled in Lodi, and had two children,  Nellie Etta Hill (Born: 1883) and Maurice Hill (Born: 1899). George was an established jeweler, watch maker and cabinet maker.

When Nellie only three years old, (around 1886), while playing in a rocking chair on the front porch, she rocked the chair forward causing it to lose balance and tumble forward, resulting in a spinal injury that damaged Nellie for the rest of her life.  Because of such an injury, she never grew to the normal size expected, and at the age of 20 was only 4 foot tall with a 2 shoe size.

Around 1901, the Hill family built their beautiful Queen Anne Victorian home at 115 S. School Street in Lodi, which was located literally across from the Post Office. George Hill designed the home himself. In 1948, the home was moved to its current location at 826 S Church Street, which was protested by neighbors in the community who had just built new homes on the street and didn't want the home to be brought there. Still, they managed to do it, and it cost roughly $3,000 in preparation alone to get the home moved in two pieces. Wires had to be elevated on the street and trenches dug, just to get around the electrical and telephone wires in order to safely move the structure.

Going back to the story, although Nellie had her physical obstacles, she was committed to being positive and doing what she could to be involved in the community. She loved music, like her brother, and she tried to maintain a social status by being involved in various groups including the choir at the local Lodi Methodist Church. She loved to play the piano, and she even composed a piece of sheet music titled "The Soldiers Farewell" back in 1905, which was considered the first published song by a Lodian. She also loved photography and took many photos which are still within the collection at the Hill House.

Maurice, Nellie's much younger brother grew up to become a concert pianist and composer who often traveled abroad. I have often wondered if Nellie was actually the biological child of Mary and George, given her very dark complexion, and lack of  similar physical characteristics in the family, but I have no proof to provide to you. That is purely my speculation. With that being said, according to an article in the Stockton Record, "George doted on his beautiful and frail daughter Nellie." --

Sadly, at the age of 29 years, Nellie succumbed to pneumonia in her home on January 30, 1912. Her headstone reads January 31st, while others have claimed January 29th.  Her funeral was held on February 2, 1912  at the Methodist Church in Lodi, with Rev. E. B. Winning officiating.  Her casket was then interred into the Hill family plot at Lodi Memorial Cemetery. It was said her funeral was one of the largest funerals at the time.

Her parents George and Mary soon followed. George passed away on February 22, 1927 from basically a really bad UTI/bladder infection, (cystitis with chronic hypertrophy of prostate) and Mary passed away from heart failure on October 12, 1934. Their death certificates said they would be buried at Lodi Memorial but the family plot only has Nellie's name and inscription on it.

For years I had wondered where George and Mary were since it appeared they were not with Nellie. Tracking down Nellie's brother, I had later found out that Maurice, who died in 1984 was interred in a niche in the mausoleum on the other side of the cemetery. After doing a little sleuthing with my fiance (the very person who originally introduced me to Nellie's grave in the first place), we decided to go check out the Mausoleum niche's to see Maurice's spot. Lo and behold, there was George, Mary, Mary's half-sister Daisy, Maurice and guess what?  Nellie! You read that right, there is a niche with Nellie's name on it.

This was cause for visiting the cemetery office to ask about the oddity of her having two graves. After speaking to the staff at the cemetery, they explained to us that someone had just talked to them about the same story that week earlier, and as it turns out, Maurice was deathly afraid of being buried in the ground. So, although his parents were buried alongside Nellie in the family plot, he had arranged in his will that upon his death he would be put in a niche in the Mausoleum, and that his family would be exhumed and re-interred with him there. Thus the reason why he didn't bother to put his parent's names on the family marker in the cemetery. Sadly, though, they made quite a few errors on Nellie's plaque, as it reads 1881-1911 when she was born in 1883 and died in 1912.

Obviously, when Nellie died in 1912, George and Mary had planned to be buried there beside their daughter, so that was why they purchased the large plot and had such a large family monument to be placed there, with enough space for all four of their names to be inscribed.

For all these years I had been visiting Nellie, and she wasn't even there. She was on the opposite side of the cemetery all along, well since 1984 anyway.  Now Nellie and the rest of her family are resting side by side, above ground in the Mausoleum.

In ending, the Hill House is a marvelous piece of Lodi History encapsulated within its walls. The whole house has been beautifully kept up and holds much of the Hill family's belongings and treasures. If you get a chance to visit it, you should, and why not stop by and visit the Hill family at the Lodi Memorial Cemetery as well. 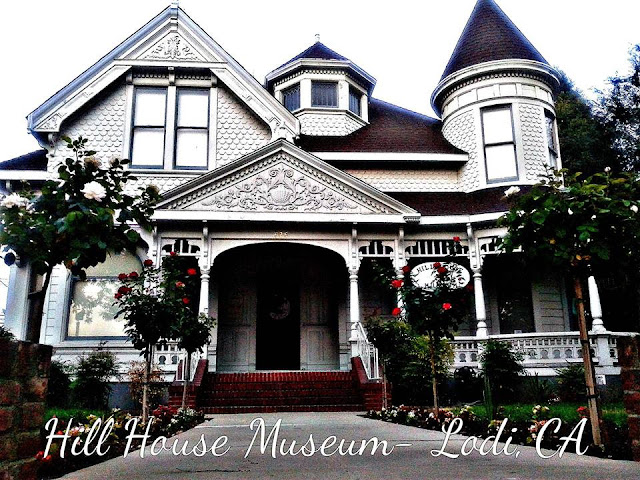